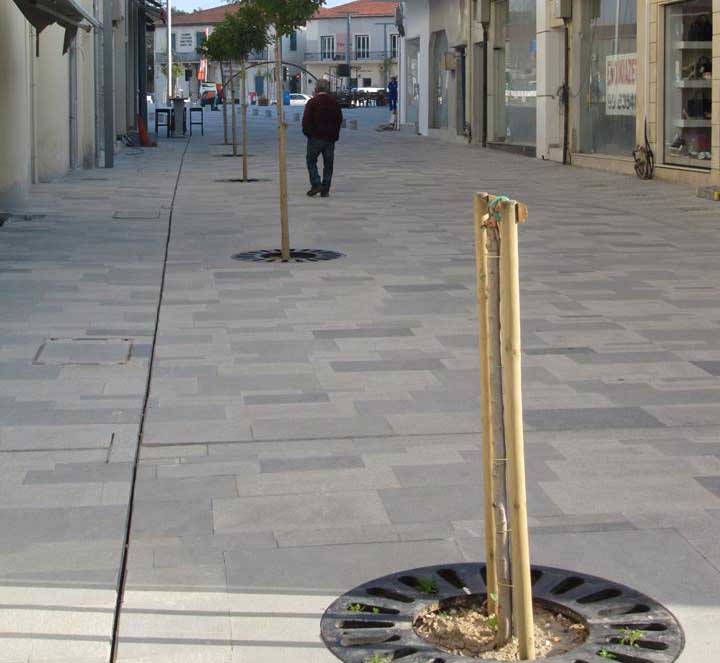 One of the newly planted saplings destroyed in Paphos' old town

Vandals have cut down newly planted trees in the centre of Paphos old town which is currently undergoing a massive renovation project to beautify and upgrade the area.

It was the second such incident in a matter of weeks.

Paphos municipality issued a press release on Wednesday calling on police to immediately identify and punish the criminals responsible.

“The mayor and the council are extremely angry,” said a municipality spokesman.

The four saplings had been planted along Makarios Avenue, the main shopping street in the heart of the commercial area of the old town, said the spokesman.

“The municipality of Paphos condemns in the strongest possible terms the recent vandalism of uprooting seedlings in Archbishop Makarios III Avenue, and calls the police to proceed swiftly all necessary investigations to identify vandals and bring them to justice, while taking all necessary measures to prevent such or similar incidents in the area,” the announcement said.

A month ago, vandals were caught on CCTV cutting down three newly planted trees and smashing shop windows, aided by insufficient street lighting.

Paphos Green Party district secretary, Andreas Evlavis, told the Cyprus Mail that he is ‘incensed’ by the latest incident and again warned that unless such actions are stopped immediately, arrests made and the young people concerned brought to justice, Paphos will have another Ayiou Antoniou street on its hands.

He was referring to ‘bar street’, in Kato Paphos, which is in the heart of the tourist area and full of bars, clubs and cafes.

Although poor lighting was blamed for the first incident, he said that this was not the case with the second incident, and that the police must do more to secure the area.

“The police are investigating and I believe they have an idea who committed this crime. This is a big disaster and students out drinking are responsible for the way they behave. They are adults and should be punished as such,” he said.

He said police should increase patrols, especially at weekends and after midnight.

“We have lost the game if our youngsters are insensitive and don’t understand the consequences of their actions, we can’t let this happen,” he warned.

The municipality statement added: “Such behaviour must not be tolerated. Paphos municipality is determined to protect and preserve the upgrading work, which has cost millions, and has made our city a gem.”