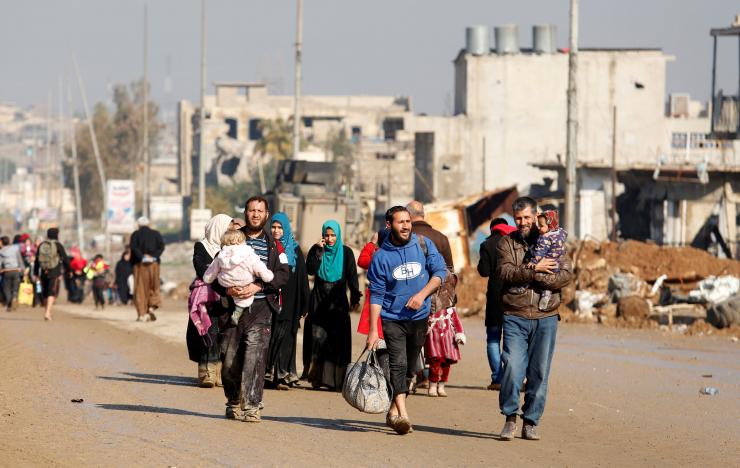 Iraqi forces are preparing a fresh push against Islamic State using new tactics, but operations to drive the militants out of their last stronghold in the country are on hold, military officials said on Friday.

Families streamed out of the northern Iraqi city during the lull in fighting, part of an exodus of people fleeing in their thousands each day, the United Nations says, heading for cold, crowded camps or to stay with relatives.

The US-backed operation to drive Islamic State out of Mosul, now in its sixth month, has recaptured most of the city. The entire eastern side and around half of the west is under Iraqi control.

But advances have stuttered in the last two weeks as fighting enters the narrow-alleyed Old City, and the militants put up fierce resistance using car bombs, snipers and mortar fire against forces and residents.

Attacks would soon resume, and “new techniques” more suitable to fighting in the Old City would be used, he said, without elaborating.

The officer asked not to be identified because of the sensitivity of discussing military tactics.

Islamic State fighters have stationed themselves in homes belonging to Mosul residents to fire at Iraqi troops, often drawing air or artillery strikes that have killed civilians.

They have also launched counter-attacks, sometimes pinning down Iraqi forces on the southern edges of the Old City. Cloud cover and rain in recent weeks have prevented effective air support, military officials say.

One of the next targets of Iraqi forces inside the Old City is the al-Nuri mosque, whose recapture would be a key symbolic victory. It is where Islamic State leader Abu Bakr al-Baghdadi declared a caliphate spanning large areas of Iraq and Syria in 2014.

As the battle continues, more civilians are being killed or displaced.

Local officials and residents said on Thursday dozens of people were buried in collapsed buildings after an air raid against Islamic State triggered a massive explosion last week.

Outside the city on Friday, hundreds of displaced people poured out of Mosul, walking through the mud with suitcases and bags.

One man said that Islamic State snipers had shot at those fleeing, and some had been killed in explosions.

The situation inside the city is worsening with no drinking water or electricity and no food coming in, residents said.

Khaled Khalil, a 36-year-old carpenter whose shop was destroyed in fighting, clutched his three-year-old daughter.

“We’ve been on the move since yesterday. We’re very tired but now we’re safe. Anybody they (Islamic State) catch, they kill. If we have time, we run,” he said.