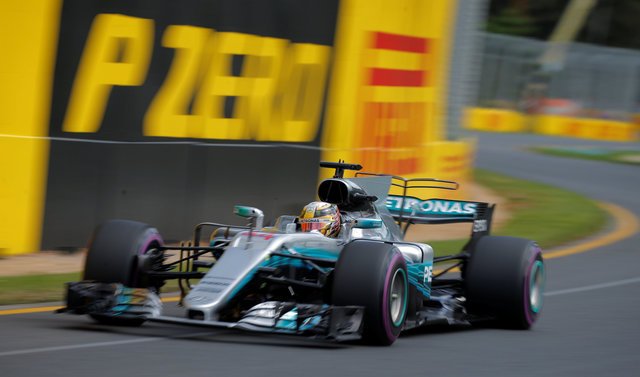 Three-times world champion Lewis Hamilton dominated practice at the season-opening Australian Grand Prix on Friday, putting Mercedes on top of the time-sheets and leaving his Formula One rivals with plenty to ponder before the weekend.

Ferrari had the pre-race buzz with their impressive pace during winter testing but Hamilton‘s times at Albert Park will give Mercedes early hope of extending their three-year dominance into another season.

The Briton led new team-mate Valtteri Bottas in a Mercedes one-two in the first session and raised the pace on slicker tyres in the second to be comfortably quicker than Ferrari’s Sebastian Vettel on a cloudy day at the lakeside circuit.

Hamilton‘s fastest lap of one minute 23.62 seconds was more than half a second clear of four-times world champion Vettel, who edged Bottas into third.

A thrilled Hamilton said the day was “99 per cent perfect”.

“After struggling with some issues in Barcelona, we didn’t know if we’d have the same thing here,” he said.

“What’s really encouraging is that we’ve arrived at the track just a week later and the car is exactly where it should be.”

Finn Bottas, who replaced champion Nico Rosberg after the German’s shock retirement last year, remarked this week that he felt no pressure stepping up from his former team Williams.

He may feel the heat now, after being well shaded by his team-mate.

The 2007 championship winner Kimi Raikkonen was fourth fastest for Ferrari in the second session, improving on his fifth placing earlier.

Red Bull drivers Dan Ricciardo and Max Verstappen were third and fourth quickest in the first session but dropped down the timesheets to fifth and sixth later after changes to their cars between the sessions.

Dutch teenager Verstappen skidded into the grass in FP2 and team principal Christian Horner said neither he nor Ricciardo had appreciated the tweaks in the garage.

“Max did a little grass-mowing (but) yes, we’re generally quite encouraged,” he told reporters.

The first session was largely incident-free but there were plenty of problems later, with Renault driver Jolyon Palmer having a particularly tough day.

With his FP1 cut short by a seal problem, FP2 was also over quickly when Palmer skidded at turn 16. He slammed into a barrier, scattering debris on the track and the red flag was raised until his wrecked car was hauled off.

Felipe Massa’s Williams car stopped half an hour into the second session.

Twice champion Fernando Alonso was 12th fastest in FP2 and may have been buoyed by the result after arriving in Melbourne anxious after a dreary winter testing for the Woking-based team.

With fatter tyres and improved aerodynamics, the speed of the new cars was impressive.Hamilton‘s fastest lap was just shy of Vettel’s pole record of 1:23.529 set at Albert Park in 2011.

Anastasiades hopes Johnson will convey message to Ankara on Cyprus