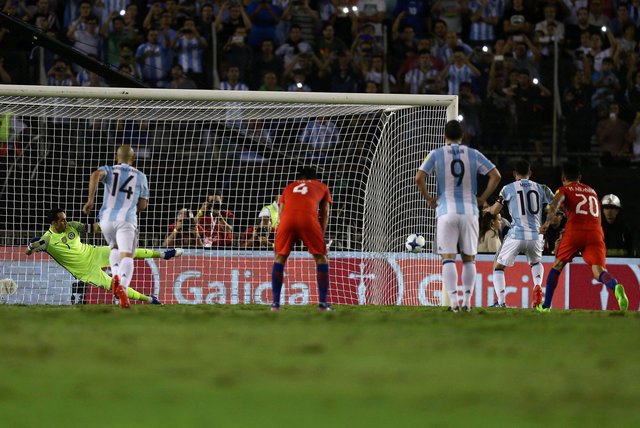 Lionel Messi converted a penalty as Argentina laboured to a 1-0 win over Chile in a World Cup qualifier on Thursday that put them back in the automatic qualifying spots for next year’s finals in Russia.

Messi beat Claudio Bravo from the spot in the 16th minute after Angel Di Maria had been pushed from behind in the first quarter of a poor, tense match on a terrible River Plate pitch.

Argentina, a shadow of the team that finished World Cup runners-up in 2014, moved into third place in the 10-nation South American group on 22 points, eight behind leaders Brazil and one in arrears to second-placed Uruguay.

Colombia, who beat Bolivia 1-0 at home, are now in the fourth qualifying place with 21 points, one ahead of Ecuador, who lost 2-1 away to Paraguay and sit in the playoff berth.

“We suffered because we lost the ball but at least we won,” relieved Argentina coach Edgardo Bauza told reporters.

Chile, missing suspended midfielder Arturo Vidal but worthy of at least a draw, gave Argentina and early scare when they had the ball in net after a free kick from the left only for Jose Fuenzalida to be ruled offside.

Argentina took the lead when Brazilian referee Sandro Ricci ruled that Fuenzalida had pushed Di Maria as he chased a fine through ball from Javier Mascherano.

Messi sent Bravo the wrong way and buried the ball in the back of the net to a roar from a wildly passionate 60,000 crowd at El Monumental.

Stringing moves together was difficult for both teams on a patchy pitch and Argentina were relieved when the final whistle went after withstanding intense pressure from the Copa America holders, who are now sixth in the group on goal difference.

Argentina central defender Nicolas Otamendi should have scored from a Messi free kick before halftime but blasted a chance over the bar.

Messi was mostly kept quiet by the Chile defence but he had another chance to score from Marcos Rojo’s cross from the left only to see his effort go over the bar.

Midway through the second half, Chile’s Alexis Sanchez hit the bar with a free kick and goalkeeper Sergio Romero had to get down sharply to prevent a subsequent cross from reaching substitute Nicolas Castillo.

On a disappointing night in front of goal for Chile, Sanchez lobbed a free kick from a similar position high over the bar and Castillo slipped through the defence to meet a cross but steered his shot wide of the near post.

Brazil recovered from conceding an early goal to beat Uruguay 4-1 in Montevideo on Thursday, with Paulinho grabbing a hat-trick in a win that all but cemented their place at next year’s World Cup finals.

The victory gave Tite his eighth win in eight games as coach and lifted leaders Brazil to 30 points in the South American qualifying group, a tally that has been more than enough to guarantee qualification in previous campaigns.

“We work hard every day and so this isn’t an accident,” Paulinho said of the three points and three goals, his first professional hat-trick.

“We played a great game and got a great win. We knew how difficult it would be here. We went behind, but we kept our concentration and we had the coolness to go after a result.

“Now we need to keep it up and I am sure this team has a lot more to offer.”

The five-times World Cup winners led second-placed Uruguay by four points before the game but it was the weakened home side that took the lead after eight minutes thanks to a penalty from Edinson Cavani.

Marcelo tried to chest down the ball to his keeper but Cavani nipped in to intercept and was pulled down by Alisson. The Paris St. Germain striker got up to rifle the ball home low to Alisson’s right.

It was the first time that Brazil had gone behind since Tite took over as coach last summer and it only took them 10 minutes to show they would not be bowed.

Neymar laid the ball off to Paulinho in midfield and the former Tottenham midfielder hammered home a spectacular right-foot shot from 30 yards out.

When Brazil took the lead six minutes into the second half it was again Paulinho who did the damage.

Goalkeeper Martin Silva could only parry Roberto Firmino’s shot from the edge of the box and Paulinho was on hand to knock the rebound home from six yards.

Neymar had a quiet game but he got Brazil’s third with 16 minutes to go when he seized on a long ball to outrun Sebastian Coates and deftly lob the stranded Silva.

Paulinho got his third and Brazil’s fourth in injury time when he cheekily chested home a cross from Dani Alves.

In the evening’s earlier match, Colombia beat Bolivia 1-0 in Barranquilla.

James Rodriguez got the winner from the penalty spot after 83 minutes to lift Colombia in to third place in the qualifying group with 21 points.

Paraguay also took three points to move into seventh place in the 10-team group with a narrow 2-1 win over Ecuador.

The top four teams qualify automatically for Russia 2018 and the fifth-placed side go into a play off with a team from Oceania.

Audit boss says cheaper for state to build its own premises