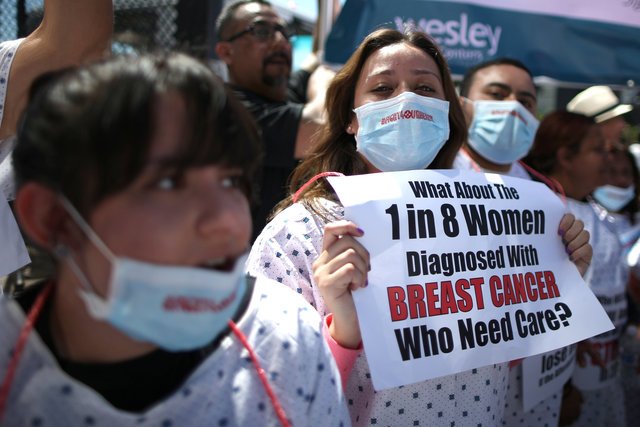 Supporters of Obamacare staged rallies across the country on Thursday denouncing efforts by President Donald Trump and Republican congressional leaders to repeal the landmark law that has extended medical insurance coverage to some 20 million Americans.

Hundreds of demonstrators turned out in Washington, Chicago and Los Angeles marking the seventh anniversary of enactment of Obamacare, as the Affordable Care Act (ACA) has become widely known.

Many talked about a very personal stake in the outcome of the healthcare debate roiling Capitol Hill.

“I feel sick today, but I came here because I’m terrified,” said Steve Martin, 27, an unemployed Los Angeles resident who was diagnosed with cancer a year ago. “The legislators have the best healthcare in the world, and we deserve the same.”

The ACA, considered former Democratic President Barack Obama’s premiere domestic achievement, has drawn unrelenting scorn from Republicans, with promises to repeal and replace it a centerpiece of Trump’s presidential campaign.

Thursday’s rallies coincided with planned action in the House of Representatives on a Republican-backed bill to begin dismantling Obamacare, but the vote was indefinitely postponed as Republican leaders and the White House scrambled to muster enough votes for passage.

Many moderate Republicans as well as Democrats have raised concerns that repeal-and-replace would leave too many Americans without health coverage.

Supporters of the bill say it would lower premiums, but critics counter that those savings would in many cases be more than offset by higher co-pays and other out-of-pocket costs.

Obamacare backers also worry about the fate of millions who gained insurance under the bill’s major expansion of Medicaid, the federal-state program providing coverage for the needy, the elderly and the disabled.

In the nation’s capital, several hundred chanting protesters gathered at Freedom Plaza, a few blocks from the White House, carrying signs with slogans such as “We Fight Back” and “Keep America Healthy.”

Robinette Barmer, 61, a former seamstress and caterer from Baltimore now on a disability pension, said that without Obamacare she could not afford the various medications she takes for ailments such as asthma and high blood pressure.

After the rally, protesters marched a block to the Trump International Hotel on Pennsylvania Avenue, where several dozen sprawled on the sidewalk in a “die-in” symbolizing the effect of rolling back Obamacare. Some 24 protesters were arrested in front of the White House after they refused get off the ground, organizers said.

Protest organizers said smaller gatherings were also held outside the congressional district offices of various Republican lawmakers around the country.