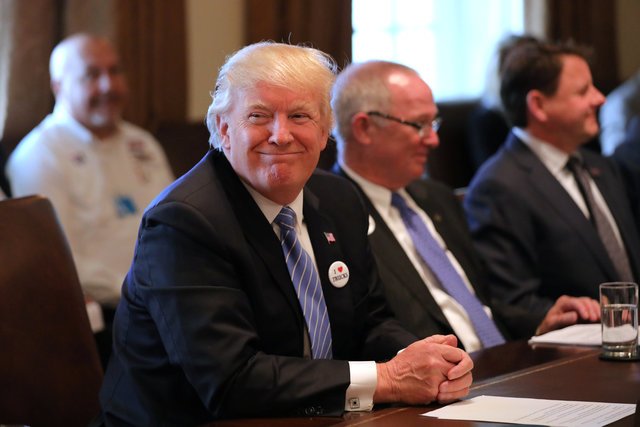 US President Donald Trump attends a meeting with truckers and CEOs regarding healthcare at the White House in Washington, US, March 23, 2017

US Republican lawmakers struggling to overcome differences over new healthcare legislation confronted a stark choice after President Donald Trump delivered an ultimatum: pass the bill on Friday or keep Obamacare in place.

Trump, a real estate magnate who touted his dealmaking prowess in the 2016 presidential campaign, faced the first major test of how well his skills would translate in Congress. Days of negotiations failed to produce a deal amid opposition from moderates and conservatives in his own Republican Party, and it was far from clear the bill had enough support to pass.

Financial markets, which have been buoyed by Trump‘s plans to cut taxes and boost infrastructure spending, are watching closely. US stock markets fell on Thursday as Republican leaders delayed a vote, and European stock markets opened lower on Friday, although the US equity market looked set for a higher open.

“Lawmakers will have to be accountable as to why they didn’t vote to get rid of Obamacare when they had the chance, and that chance is today,” White House budget director Mick Mulvaney told CBS This Morning.

The House Rules Committee, which sets the duration of the debate on legislation and decides whether amendments will be allowed to be offered, was expected to formally send the Republican healthcare bill to the House floor on Friday morning.

Democrats uniformly oppose the bill, and it appeared to lack the needed Republican support as well, despite last-minute changes intended to broaden its appeal.

At least 35 Republicans still plan to vote against the bill, according to CBS News. If all House members were to vote, Republicans can only afford to lose 21 votes.

The American Health Care Act is the first foray into legislation for Trump, a New York businessman and reality television star who took office on Jan 20.

The vote had been set for Thursday, the seventh anniversary of the signing of Obamacare. In an embarrassing setback, it was postponed because of tepid support.

By Thursday evening, Trump signaled he was done negotiating and demanded lawmakers back the bill, or face the consequences.

Replacing Obama’s signature health care plan was a key campaign pledge for Trump and Republicans, who viewed it as overly intrusive and expensive.

Obamacare aimed to boost the number of Americans with health insurance through mandates on individuals and employers, and income-based subsidies. About 20 million Americans gained insurance coverage through the law.

The House replacement plan would rescind taxes created by Obamacare, repeal a penalty against people who do not buy coverage, slash funding for the Medicaid program for the poor and disabled, and modify tax subsidies that help individuals buy plans.

Conservatives believe the Republican bill does not go far enough to repeal Obamacare and moderates think the plan could hurt their constituents.

House leaders agreed to four pages of last-minute amendments, including allowing states to choose which “essential benefits” are required in insurance plans, keeping a 0.9 per cent surcharge on Medicare for high-income Americans for six years, and giving states more money for maternal health and mental health.

It was unclear whether that was enough to win over skeptics.

Trump has indicated an eagerness to move on to tax reform, trade deals and infrastructure, but a defeat in Congress will cast doubt on his ability to deliver.

If Republicans manage to ram the legislation through the House, it faces a tough fight in the Senate. It could draw opposition from moderate Senate Republicans who do not like the House measure’s new restrictions on federal funding for women’s healthcare provider Planned Parenthood.

Many senators, especially those who represent poor, rural states, worry that constituents who for the first time have health insurance because of Obamacare, will lose that coverage and not be able to afford the Republican replacement.

The House and Senate had hoped to deliver a new healthcare bill to Trump by April 8, when Congress is scheduled to begin a two-week spring break.

Security for state officials should be based on risk, not rights, audit office says