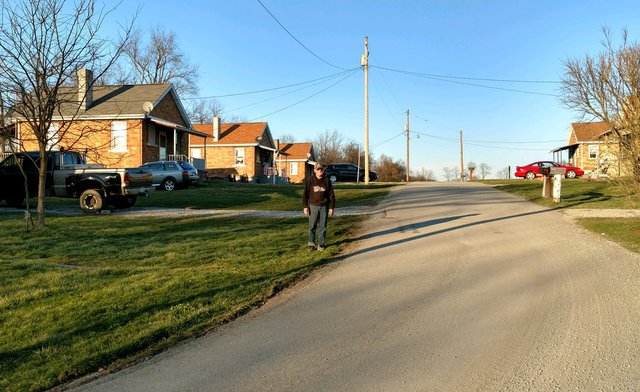 David Stawovy, owner and manager of the town, walks down a street in Reduction, Pennsylvania, March 23, 2017

Got $1.5m to spare? If so, tiny Reduction, a one-time company town built to house workers at a long-vanished garbage-processing plant in western Pennsylvania, could be yours for the asking.

The aptly named town is home to 60 residents, down from 400 in its heyday. They live in 19 tidy brick houses, paying rent to the Stawovy family, proprietors of the unincorporated village for the past 70 years. The asking price includes a one-room schoolhouse that was long ago converted into a duplex residence.

The plant, built by American Reduction Co on a wide bend of the Youghiogheny River, shut down in 1936 after processing waste from the city of Pittsburgh since the early 20th century.

Workers would render animal carcasses, and separate metal from household waste for resale.

“This was the original recycling plant,” said David Stawovy, 67, who owns Reduction with his three siblings.

In 1948, David’s father, John, owned an adjoining farm and was thinking about buying one of the larger homes in Reduction for his growing family. At one time, he would have had 28 from which to choose.

“My mother and dad wanted their own place,” David Stawovy said, “and the man said: ‘Why don’t you buy them all?’”

The senior Stawovy ended up doing just that, paying $10,000 for the place, lock, stock and barrel. It was a decision he never regretted, or at least never admitted regretting, his son said.

“He never complained. He made a living on it,” said the younger Stawovy.

All that is left of the processing plant is the foundation, Stawovy said. Once the town dump contained a treasure trove of collectible bottles, but it was wiped clean years ago.

Stawovy said his advancing age and the nursing home care his parents needed before their recent deaths led the family to put Reduction up for sale. He needs to sell so his siblings can cash out their shares of the inheritance.

“We’d like to travel,” he said. “We don’t need the aggravation.”

Thirsty California looks to the sea