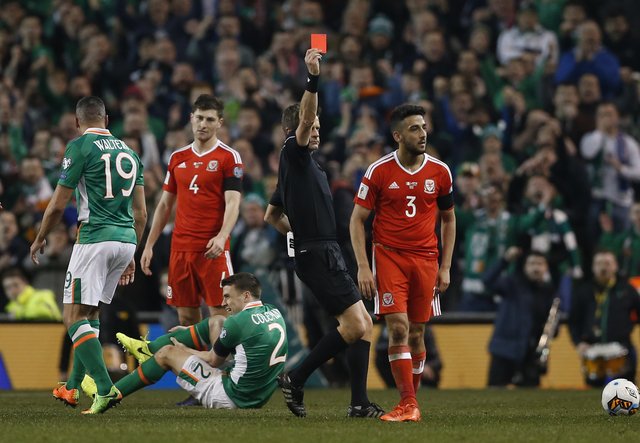 Ireland’s Seamus Coleman broke his leg after a scything challenge from Wales defender Neil Taylor, who was immediately dismissed in the goalless Group D qualifier at Dublin’s Aviva Stadium on Friday.

The Everton fullback left the field on a stretcher, with an oxygen mask on his face, after Taylor recklessly clattered into him on 68 minutes of the encounter that left Wales facing a tough task to qualify directly for the World Cup.

“It’s obviously a real blow to him, he’s having a season of a lifetime at club level. He’s a big player for us, a great captain so it’s a big, big loss to us and Everton,” Ireland manager Martin O’Neill told a news conference.

Taylor’s wild challenge came two minutes after a booking for Wales talisman Gareth Bale meant both men will now miss the key qualifier against Serbia, who top the group on 11 points, ahead of Ireland on goal difference and four points clear of Wales.

Ireland were already without the suspended Robbie Brady and injured Wes Hoolahan and the group leaders going into Friday’s games badly missed James McCarthy early on after the central midfielder’s withdrawal just before kickoff.

Spending long spells without the ball, Ireland still managed to keep Bale at bay, hurriedly closing the subdued Real Madrid man down at every touch as the half ended without a single shot on target.

Wales, who named the same side that famously beat Belgium 3-1 in last year’s European Championship quarter-final, started the second half as they did the first and Bale came alive, finally testing Darren Randolph’s goal twice in four minutes.

The game turned on Taylor’s red card as the packed stadium, buzzing since kick off, erupted as the hosts piled on the pressure.

There was still time for Bale to almost snatch it with a long range left foot drive but Wales’ 25-year run without a victory over Ireland remained as Coleman’s injury overshadowed the night.

“It’s a bad one for Seamus, I hope he’s not out for too long because he’s one of the best fullbacks in the Premier League. Neil Taylor’s not that type of player and he’s been there himself with that type of injury,” Wales manager Chris Coleman said.

“He’s a great boy and Neil Taylor’s devastated himself.”