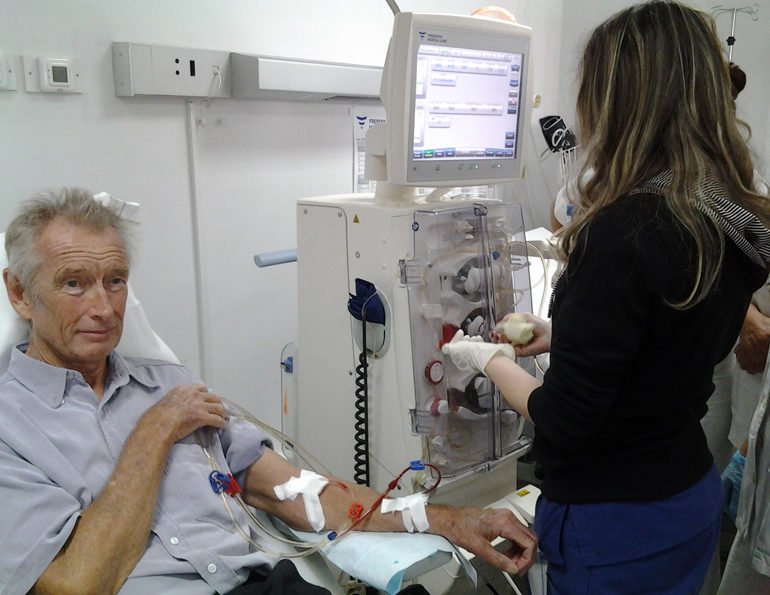 A PAPHOS charity is again stepping in to donate two further lifesaving dialysis machines for Paphos renal unit, which the government is unable to fund, according to the charity head.

Graham Brown, the chairman of the Paphos Kidney Association, who has hereditary polycystic kidney disease and receives regular dialysis treatment at the unit to keep him alive, told the Sunday Mail that Paphos general hospital had requested their help.

Each hemodiafiltration (HDF) unit comes with a 25,000 euro price tag. If a patient doesn’t receive dialysis when needed, they will die within five days.

“A few weeks ago the hospital asked us to donate two more dialysis machines as the government are not helping,” Brown said. “I told them we have enough money for one, and we are collecting for the second one. We are almost there, we have about ten thousand euros to go, and we hope to get that in around six weeks.”

He added that the charity aims to supply the unit with two new machines every year to replace old ones which have a lifespan of around 14 years.

Brown said that huge efforts are being made by the community, British expat residents in particular, to support the registered charity, and that they are hoping to do more to encourage Cypriots to join in.

“We are asking the mayor of Paphos, Phedonas Phedonos, if he will be our patron, to try and get more Cypriots involved.”

He said that the renal unit at Paphos general hospital now has 16 machines which are working, some better than others.

“Five are new in the last few years, their lifespan is around 14 years but many others are getting worn out,” he said, concerned that the ageing machines are unable to cope with the growing demand for lifesaving treatment. Chronic kidney failure is permanent and irreversible and the only chance of survival is to wait for a transplant.

Nurses at the unit are having to work night shifts to keep up with the demand and a much-needed proposed extension, which has been backed by the hospital director, looks set to go ahead.  The extension will create at least five more beds, making treatment easier for both patients and nurses.

“We have been pushing for an extension as there are now around 75 patients needing treatment and negotiations are coming to an end and it’s looking good.”

He said the extension is vital as the current one is cramped, and there is no room between the beds.

“You can’t even get a wheel chair down the middle of them,” he said.

Currently, 12 patients receive dialysis machines in the morning, 12 in the afternoon and three times a week, eight at night time

Brown has just completed his 500th dialysis treatment, each one takes five hours and he needs them three times a week to keep him alive. It costs around €50,000 to treat each patient a year.

Brown said he can’t fault the treatment itself, or the level of care and professionalism by staff at the hospital.

“The nurses are wonderful and the support of my wife Heather has been instrumental in keeping me going, she is my rock. Without this treatment, Heather would have been a widow four years ago.”

Although Brown’s condition is getting steadily worse, he remains a driving force behind the charity and was awarded the Heart of Gold award Cyprus for his efforts in 2015.

The association has done much to improve the unit, by raising money and purchasing a huge amount of equipment since its inception 15 years ago.

“It will cost around 170,000 euros to fully equip the extension and I hope that we can achieve that also,” he said.

Brown has just been presented with a cheque for 5,500 euros from Minthis Hills golf course, and a regular monthly ‘kidney quiz’ which is held at the UKCA organised by a British expat Peter Milligan, helps too, he said.

Thousands demonstrate in London against leaving the EU

Take your pick of plays in Nicosia