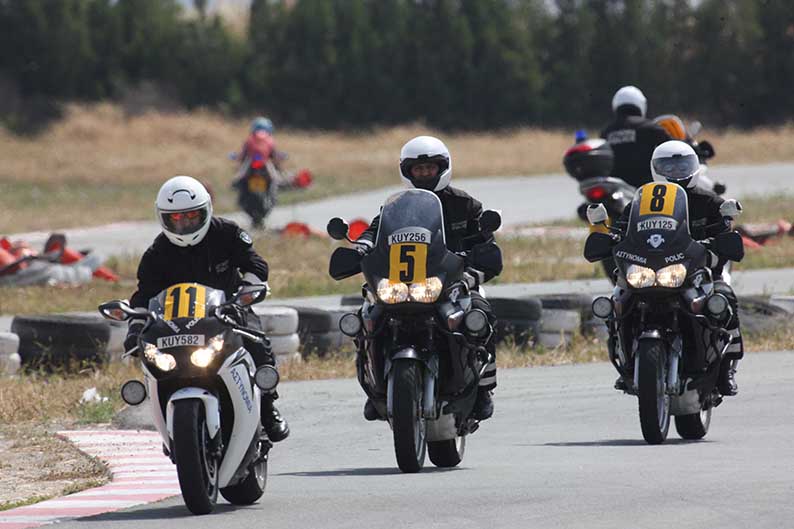 TWO experienced Paphos bikers have published a definitive handbook for the advanced rider trainer with the aim of saving lives and are now setting off on a two-week European road trip to help promote the book this month.

Retirees, Steve Tucker, 61, and David Rainford, 63, of ‘RoSPA (royal society for prevention of accidents) advanced riders Paphos region’ – a local branch of the UK organisation, have a passion for riding motorbikes and training other riders in advanced riding skills. Their knowledge and expertise has culminated in the publication of their first book.

After leaving the UK police, Tucker started his own business connected with UK driver training and Rainford, an advanced motorcycle rider, is also a RoSPA qualified advanced rider tutor.

Tucker, who met his co-author whilst living in Cyprus, moved permanently to live in Peyia in Paphos in 2008 and has been riding motor bikes for 40 years. As a UK traffic police officer, he trained in advanced riding and driving skills.

In Cyprus, he has trained more than 50 bikers, including those on the British bases in 2014. He has also been involved in training the Cyprus police.

“They have good riding skills and I helped them with communication, technique and concentration,” he told the Sunday Mail.

The ex-police officer decided to write the book, spurred on by numerous positive comments about his training methods and techniques by satisfied students who suggested he write it all down. He said that it combines the theory of police motorcycle road craft with techniques on how to train for real life experiences on the roads.

“This is probably the first publication of this type; riding a police motor bike in operational situations requires a high level of expertise. Riding a motorbike for pleasure or commuting also requires an exceptional level of skill. Sadly, a large number of crash scenes I attended in the UK which involved a biker was generally caused by rider error.”

Tucker said that both he and fellow biker, co-author David Rainford love riding in Cyprus, as it takes in every possible environment. The weather is mostly favourable, routes are scenic and offer the possibility of riding from the coast to the top of a mountain top and back, all in time for lunch.

However, he said that other road users can sometimes pose problems.

“Riding in the towns is a situation all of its own. Car drivers in Cyprus are not as aware of motorcycles as the UK for example. We teach riders to deal with the public in a different way and expect the unexpected.”

He said that one of the biggest causes of accidents in Cyprus is mobile phone use and is surprised that more isn’t being done by the authorities to address the fact. “Once focus is shifted to a phone, drivers’ vision drops badly and concentration is gone. This is how accidents happen,” he said.

Rainford said: “We believe our book has the potential to be a major contributor to increased road safety by improving the skills of the most vulnerable road users. The content of the book is not just directed to people who wish to be advanced rider trainers, it can be used by any rider seeking to improve their riding skills.”

He said that trainers will also benefit from the publication by improving their teaching skills and strengthening their commitment to continued professional development.

The authors will be promoting the publication of their book with a European Road Trip on their motorbikes from England, across Europe to Cyprus.

Advanced Rider Trainer – The Handbook for Training the Trainer, is available to purchase at Amazon

EU leaders seek unity in Rome, despite Brexit and protests