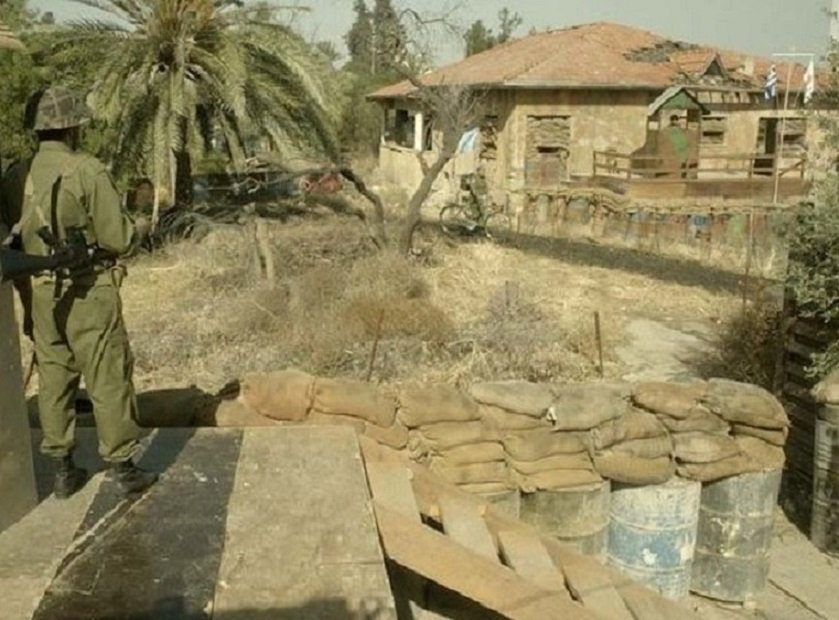 Collecting memories of the past has been a life-time passion of film director Panikos Chrysanthou, whose The Story of the Green Line premiered this week at Nicosia’s Cineplex.

The film tells the story of two soldiers, Greek Cypriot Kypros and Turkish Cypriot Murat, who, in the late 1970s, found themselves manning guard posts across from one another on opposite sides of Nicosia’s Green Line.

Protagonists and the storyline delineating the development of their personal friendship are fictional but the movie is rooted in the firm and tragic reality of its times, combining elements of some half dozen true stories that Chrysanthou gathered in the course of interviewing people about their personal experience of the Cyprus conflict.

The compelling and sometimes harrowing narrative takes account of such incidents as the killing of a Greek Cypriot National Guardsman Tryfonas in the no-man’s land of Nicosia’s Ayios Kassianos neighbourhood in the early 1980s.  He was shot dead by a Turkish Cypriot serviceman he had befriended on orders of a Turkish officer, outraged by the soldier’s fraternising insubordination.

In chilling flashback to 1974, the film graphically and movingly depicts village executions and the intricate intimacy linking victims and perpetrators. It invokes the tale of the fig tree that grew from the undigested figs in the stomach of one of the Turkish Cypriot missing.

Documentary maker and cameraman, his first fictional film Akamas, released in 2006, was similarly grounded in fact, an account of the 1950s love story of a Turkish Cypriot man and Greek Cypriot woman from the Akamas peninsula. On release, the movie was screened in Venice.

Chrysanthou rejects being categorised as a director focussed solely on the politics of the Cyprus problem and insists his films are “personal and human”, much like the work of the famed Swedish director Ingemar Bergman.

“I make personal cinema, the same way Bergman makes his,” he says.

“Bergman’s films speak about human situations, human feelings. He speaks about his life, his thoughts and soul through the stories he creates. I find this way of making films the most sincere because he speaks about something he knows very well,” he explains.

“I also speak about stories that I know very well. [The Story of the Green Line] is not only about the war. It is about the philosophy of life through a war story. It is about forgiveness, tolerance, and finding a way of living. It is about a 19-year-old boy who witnesses his father being killed in front of him. Death passes next to him but he survives. Now he tries to come to terms with all that this entails.”

Chrysanthou allows that he is less interested about making movies based on the present times. His abiding interest and preference is to show what went before. Indeed, his film-making is eloquent testament to his love of the island’s traditions and the details of its rural rituals.

“I have this tendency I admit to that – I like old times a lot,” he confesses. “Perhaps because of my own childhood – because the world of my childhood was simple and pure. We didn’t have electricity. But in this old life people had a kind of communication that I liked very much.”

He pauses for a moment’s reflection then continues: “[When I was young] I spoke with my father with eyes only. He looked at me and I understood what he wanted. I thought about it a lot. I had relationships with foreigners but if I didn’t speak to them there was no communication. I had great difficulty to speak with them using my eyes or gestures, to communicate those innermost things that are beyond verbal expression. And even with words, the very same words might have different meaning for different people. So even if we use the same words we can misunderstand each other.”

Does he feel that in case of Greek and Turkish Cypriots this art of wordless communication was (perhaps still is) easier? Is this what he misses when he talks so fondly about the past?

“Yes, we have the same culture, even now,” he says. “When I am in a room full of people somewhere in a different country and there is a Turkish Cypriot in the same room I will be able to tell him or her apart from everybody else. It is because we are the same.”

Not surprisingly, this affinity between Cypriots underpins much of

The Story of the Green Line.

Kypros and Murat, though separated and juxtaposed against each other by the recent war, understand and communicate with one another much better than with their respective commanding officers, coming as they do from the “motherlands”. Even the fact that the both lost their fathers in similar way brings them closer together and helps them heal.

Chrysanthou says a further inspiration in making his film was observing an evolving friendship, forgiveness and healing in the real world, between two men, a Greek and a Turkish Cypriot, both of whom had lost family members in the Cyprus conflict, both of whom were able to remember, to forgive and to forego thoughts of revenge.

“That is why I decided to make this story – a story about love that is stronger than hate,” he says.

The Story of the Green Line is currently showing at the K-Cineplex in Nicosia, Limassol, Larnaca and Paphos. The film is in Greek with Turkish or English subtitles, depending on the time of the screening.

More than 14,000 booked for traffic offences in March