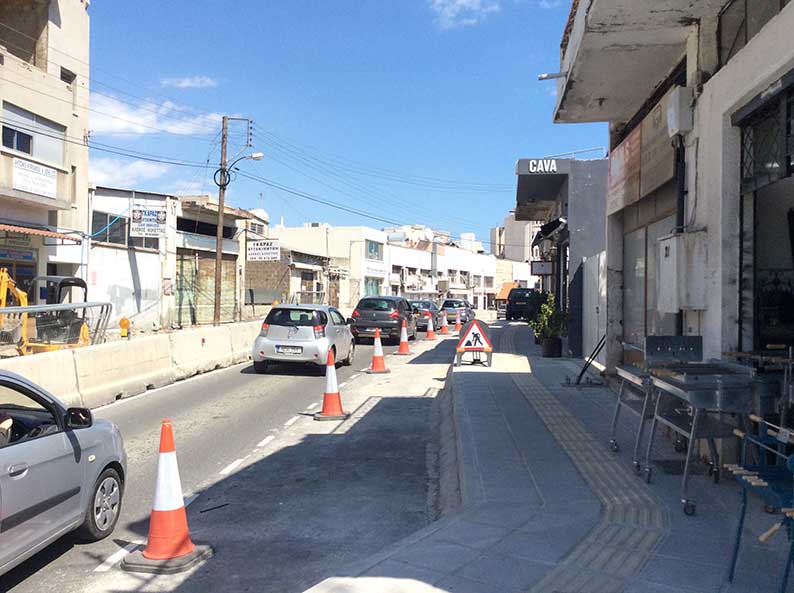 Major road works finally underway in the old port area of Limassol should end years of traffic congestion and make the roads more accessible for pedestrians.

Roadworks which began at the end of January at Ayias Theklas street – the road from the Ayios Antonios church towards the castle have already began and are part of an 18-month project costing a total of €2.5million plus VAT.

The cost has been split with 20 per cent being paid for by the Limassol municipality and the remaining 80 per cent by the state, according to the town planning department.

The aim is to widen and improve the roads to four lanes, two in each direction, starting from Commandarias street until Siafi and Kioproulouzate streets.

What is currently a roundabout next to the castle will become a triangular islet with the area’s iconic tree staying in place. Instead, the cars will circle the buildings between Ayias Theklas street and Siafi street (which leads to Limassol marina).

“This project has been discussed for an extremely long time and it is finally being implemented,” an official at the Limassol Chamber of Commerce told the Sunday Mail.

“It’s the road I take to go to work every morning and I can see the work is happening at a very quick pace.”

The project also entails introducing 37 parking spots, four taxi stops and four bus stops to ease the congestion problems often caused by the two bus stops currently in use, one outside the citizen’s service centre on what is currently a two lane street and the other on the side of the roundabout.

“I hope they can hurry up with this. Finding parking there is terrible, it often results in going around in circles for a ludicrously long time,” resident Marianna Neophytou told the Sunday Mail.

The area will be far more pedestrian friendly with cobbled pavements and ease of access for disabled persons, better street lighting and a rainwater drainage system, the town planning department said.

The general beautification and upgrade of what were scruffy, congested streets has put pressure on the equally scruffy small car repair shops that line Ayias Theklas street.

“We can’t really complain about the road works happening here because these things are necessary for the area. It’s the same if it there was some works happening outside your house. Sure, before cars could easily pull up here now it’s not that easy,” Stelios Charalambous, a mechanic on Ayias Theklas street, told the Sunday Mail.

But beyond the temporary disruption, the mechanics also know they are not wanted, that the grease and the noise of the repair shops will not sit well with the area’s new look.

“The problem is that we know that the nature of our work doesn’t really fit in here anymore,” said Charalambous.

“If I had a chance to go elsewhere, I would.”
Asked what steps he may take, he simply shrugs. “I don’t know. I rent the place here and I don’t know what might happen from there.”

A public works department official said “a lot of them won’t leave. It’s private property. Some are even built on Turkish Cypriot land so there’s a whole lot of other complications there.”

A source at the Limassol municipality said incentives were not being offered to encourage the mechanics to leave.

Former Limassol mayor, Andreas Christou, had told the Sunday Mail a year ago that the municipality hoped that the owners of the premises would make their own decisions to turn them into businesses more fitting for the area.

“Businessmen might see this is an opportunity to change their field of work and operate a bar there or a restaurant to fit in with the broader picture and relocate their car repair shops elsewhere to an industrial area,” he said.

According to the regional secretary for Limassol of Etek – the Cyprus scientific and technical chamber, Yiannis Kakoullis there were also plans for a road linking the marina and the new port which included sprucing up the industrial area between the old town and the Limassol mall.

The study, according to the Limassol Chamber of Commerce, was a €50million project that would include jetties, parking spots and improved water sport facilities and seek to cater to both commerce and tourists with office spaces and new buildings.

Incentives would be offered so that many of the industrial buildings could be restored and private land utilised, the chamber added, noting that the plan also provides for high rise buildings.

Spearheaded by Christou, the plan was not only to improve the aesthetics of the area but also bring in small and medium businesses.

A source at the municipality said the study was currently being re-evaluated.

“I’m glad to hear this,” Limassol resident Angelos Ioannou told the Sunday Mail. “The road from the old town to the mall is really an eyesore. I’ve heard tourists on the bus say it was like going back in time when they looked out of the window in that area.

“At night it’s very dark and the whole thing is just ugly.”