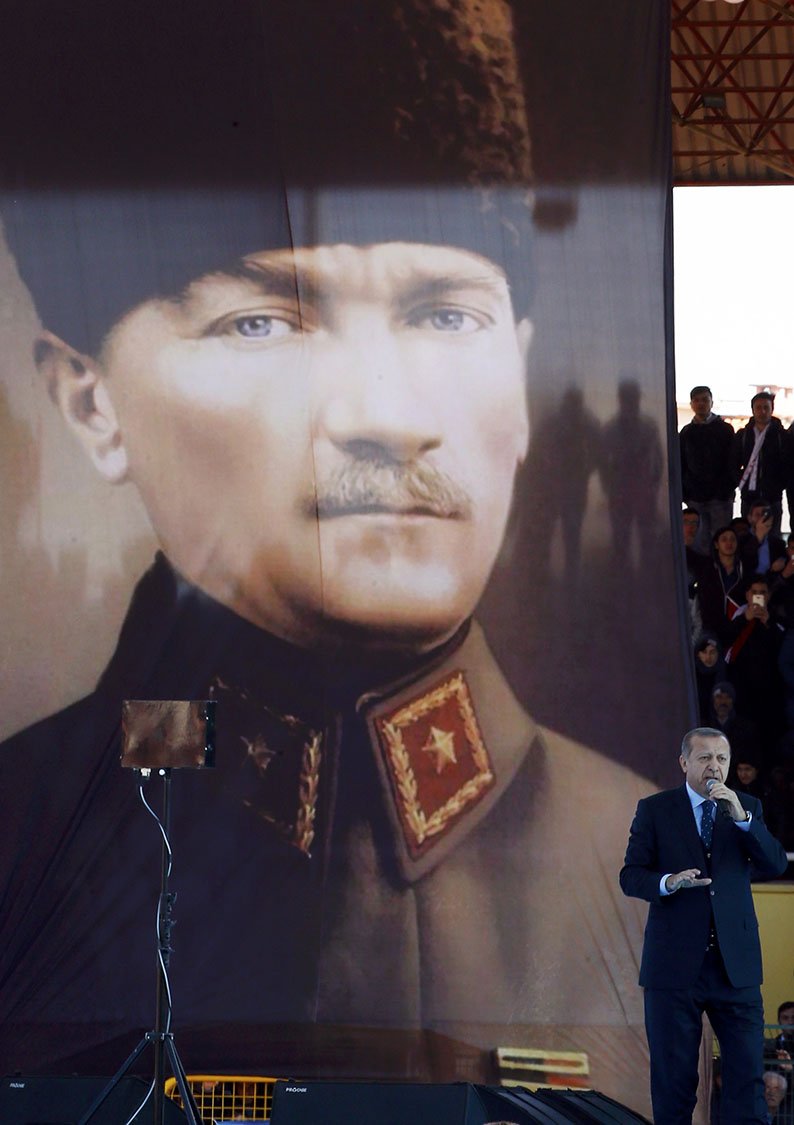 Turkish President Tayyip Erdogan, with a poster of modern Turkey's founder Ataturk in the background, speaks during a ceremony marking the 102nd anniversary of Battle of Canakkale, also known as the Gallipoli Campaign, in Canakkale, Turkey, March 18, 2017. REUTERS/Osman Orsal

Nobody takes kindly to being called outright by their surname – sans prefix or title.

In Cyprus, we are rarely addressed solely by our surname. I am usually addressed as Kyrie Ermi (Mr Hermes) in government offices, hospitals, banks or wherever. It is perhaps a particularly Cypriot affectation in an effort to sound friendly, receptive – an ice-breaker to put parties at ease.

In the same manner, the title of the leader of the occupied area, President or Mister Mustafa Akinci, has now become simply, Akinci.

There is much in a name and the way the media use it.

As the Cyprob talks soured, the name or title etiquette/protocol was displaced by economy of language, a sign of disaffection by the media with the protagonists and their failure to agree certain important chapters of BBF.

Some might say that thankfully, after four years, we no longer need to be reminded that Anastasiades is the president of the Republic and Akinci the leader of the occupied areas.

It seems that by failing to resolve the Cyprob, both leaders are now regarded with some contempt, the Enosis debacle suddenly and unexpectedly bringing the talks to a juddering halt.

But in all fairness, it must be remembered that the talks really came to end after both sides met in Mont Pellerin, and not in Geneva nor after the Enosis debacle.

It was clear in Mont Pelerin after the exchange of maps, the power sharing about-turn by the Greek Cypriots, the four freedoms demand by the north (Turkey) and other irritating minutia, that BBF was, and is, a non-starter and that the talks were always in Ankara and not Nicosia.

President Recep Tayyip Erdogan is now known sarcastically as ‘the Sultan’ or simply as Erdogan. His raging rhetoric to adulating thousands since last July’s coup has placed him among the ‘gods’ in the eyes of most Turks, and in the bad books of most EU member states.

By distancing the Turkish president from membership of the EU, the EU has hammered a nail into any hope of a successful outcome to what most Cypriots, on both sides, now consider pointless talks leading nowhere.

As we grow older, we are supposed to grow wiser. But we also become increasingly conscious of our mortality – our impending end.

This is what seems to be happening with 63-year-old, Kyrie Recep who has been the president of Turkey since 2014. He previously served as prime minister from 2003 to 2014 and as the mayor of Istanbul from 1994 to 1998. He rebuilt the then bankrupted Turkish economy almost single handed and was responsible for spreading healthcare and education countrywide, more especially outlying regions. In the eyes of ordinary Turks, he is a man among men, a god, another Kemal Ataturk perhaps.

But recent public outbursts aimed at certain EU member states have wrought angry responses from several EU state leaders. Has he realised that he is running out of ‘mortality’ and now seeks to be remembered for bringing Turkey into the EU which, since those nasty Nazi exchanges has all but tossed thirty years of EU/Turkish negotiations for membership into the waste bin?

The US has yet to comment on the Turkish president’s outbursts, Turkey being one of their most important strategic allies against Russia.

And given that EU member states have invested hundreds of billions in Turkish industry, employ millions of Turks within Europe itself and are threatened with a serious influx of refugees if they fall out with Turkey, Europe’s hands are tied.

President Recep Tayyip Erdogan knows this and will continue to espouse claims to the Aegean Islands and Cyprus, which he says are Turkish and taken from Turkey during the Treaty of Lausanne.

In all fairness to Kyrie Recep, the British unilaterally made Cyprus a crown colony in 1925, at a time when Britain was only a tenant of the island and not rulers. Maybe Kyrie Recep has taken a leaf out of Cyprob Talk negotiators’ book and will keep harping back to the past and making unrealistic claims.

The worry is that he might one day decide to make good those claims with the help of the third most powerful Nato military force in the world.

If he wins the April 16 constitutional referendum, which will place him among the gods, where he believes he belongs, alongside Kyrie Kemal and Kyrie Sultan Suleiman the Magnificent, Europe, and more particularly, Cyprus, both have much to fear.

Erdogan’s Nazi slur could lose him the Turkish Cypriots