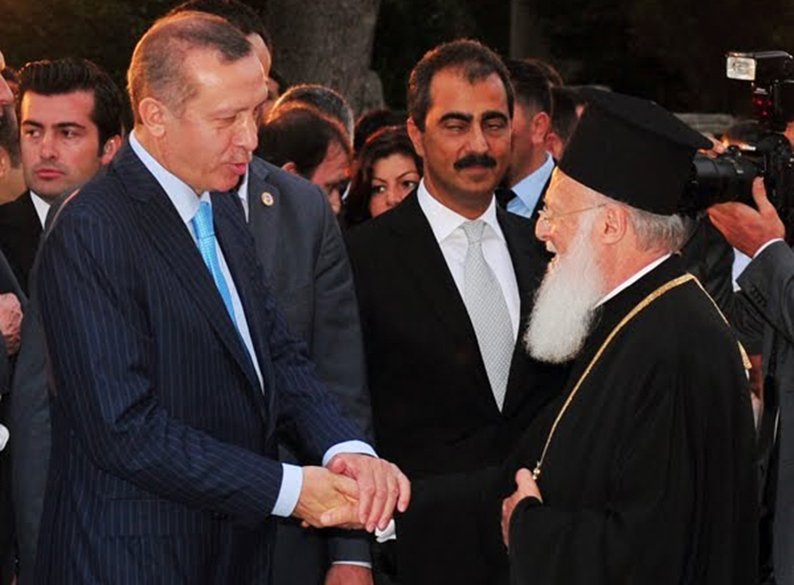 Turkish President Erdogan with Patriarch Bartholomew I of Constantinople

Every time somebody wants to punch Germany below the belt he goes on about her Nazi past.

Boris Johnson did it when he compared the EU to a Nazi super state during the Brexit campaign and Donald Trump when he likened the US intelligence services to the Nazis.

Greek protestors went over the top with Germany’s Nazi past during the financial crisis when they superimposed Hitler’s toothbrush moustache on portraits of Angela Merkel festooned with swastikas. Not to be outdone Turkish protestors did the same last week in Istanbul.

President Trump refused to shake hands with the German chancellor for the cameras at the White House last week and President Putin was equally childish and cruel to her when he allowed his black dog to walk in on a meeting with her knowing she has a phobia of dogs.

And now President Erdogan calls Germany and the Netherlands Nazi for not allowing political activities by his ministers there.

The lack of respect toward Angela Merkel shown by these authoritarian leaders is not just borne of an inferiority complex about the success of Germany and a sexist attitude toward Angela Merkel. It marks the beginning of history after the collapse of the Soviet Union, and it is time Europe woke up to this seismic change and the arrival of these uncivilised parvenus.

The British can be forgiven because they do not know what they are doing after Brexit and because of their humor and unique ability to poke fun at themselves. More’s the pity they are leaving the EU just when they are needed most.

But what on earth possessed Turkey’s dour humorless President Erdogan to punch Germany and the Netherlands below the belt with his bizarre Nazi slur?

Quite apart from being entirely inappropriate, it is also bit rich considering he is holding a referendum next month to give himself powers not too different to those acquired by the Nazi leader himself in 1934 after an uncannily similar referendum to merge the office of chancellor (prime minister) and president.

Calling the Germans and Dutch Nazis over a few relatively insignificant bans on public meetings, and insulting the most liberal, pro immigrant anti-fascist leader in Europe, is the last straw for many secular pro-European Turks who comprise half the population of Turkey and loath what Erdogan is doing politically.

His antics are embarrassing for many Turkish Cypriots too and should give them pause for thought about how far they wish to be associated with Erdogan and whether as EU citizens they should be seeking a free-standing relationship with the EU pending a settlement to wean them off Turkish hegemony.

In the meantime, there is the hope that Erdogan will make good his stated intention to refer his complaints against the bans to the European Court of Human Rights. Putting the Nazi slur to one side, Turkey has the glimmerings of an arguable case against the Netherlands for breaches of the European Convention on Human Rights that protects freedom of expression, assembly and association.

It is true that human rights law expressly excludes non-nationals from protection when they engage in political activities in other states, but the bans in Germany and the Netherlands did not distinguish between nationals and non-nationals.

An application by Turkey to the European Court of Human Rights would clear the air both in terms of uncovering the facts as well as test whether the recent bans on the political activities of the Turkish diaspora in Germany and Holland stand up to human rights scrutiny.

It is a bold lawyer who attempts to forecast how the human rights court would approach such a complex inter state case but on the facts the court would have to resolve the question it asks in all cases that involve a public interest limitation, namely: whether the ban was necessary in a democratic society and proportionate to a legitimate aim?

The Netherlands could argue the integrity of her democratic process required the exclusion of the Turkish ministers from the country and that this was necessary and legitimate. The political meeting that Turkish ministers were barred from attending was to promote a yes vote in the referendum in Turkey in the middle of a crucial election in the Netherlands in which immigration was the dominant issue. Arguably it was liable to give an unfair advantage to the opposition two days before polling day and thereby distort her democratic process.

The court would have to decide whether the integrity of the Dutch electoral process was likely to be compromised by the refusal of Turkish ministers to defer their meeting to after polling day in the Netherlands, or whether the Dutch government itself abused the public interest limitation for electoral advantage contrary to the general principles of the convention.

President Erdogan did not just insult friendly states; he also made a speech attacking the Court of Justice of the EU for two rulings on the Islamic headscarf.

He branded the court’s decision that it may be lawful for private employers to ban outward manifestations of religion, as prejudiced against Islam and that it marked the beginning of a clash between cross and crescent.

This is utterly irresponsible when you consider that until recently the headscarf was banned in government spaces in Turkey itself under Turkey’s secular constitution. President Erdogan protests too much about a subject he knows very little.

He no longer sounds like the Erdogan recommended to the Christian world by no less a figure than Patriarch Bartholomew I of Constantinople a few years ago, nor does he sound like the Erdogan who persuaded the military in 2004 to accept the Annan plan and who helped bring about freedom of movement across the green line in Cyprus.

The principle applied by the court in discrimination cases is that ‘equal treatment is only breached when two categories of persons whose factual and legal circumstances disclose no essential difference are treated differently.’

The Court of Justice decided in a case from Belgium that this principle is not breached if a private employer bans outward religious symbols by all employees provided there is an internal rule in place that bans the symbols of all religions; but that it was potentially indirectly discriminatory if it affected persons of a particular religion more than other religions.

In the other case from France it decided that an employer is not objectively justified in banning the headscarf if the reason for the ban was to appease customers.

After spending forty years defending the rights of immigrants, migrants and émigrés in London, I have no problem at all with the EU court’s decisions. Europe has excellent anti-discrimination laws. The sad fact is that it is the good people of Europe that have turned a bit xenophobic.

What migrants need in the present anti-immigrant climate is not more legal protection but the wisdom not always to insist on their strict legal rights. The wisest course to survive the current wave of intolerance is to show respect for the host culture and remember that the pragmatic ‘when in Rome do as the Romans do’ is the best policy.

Erdogan sees himself as a man among gods

For Eleni the patriot read partitionist