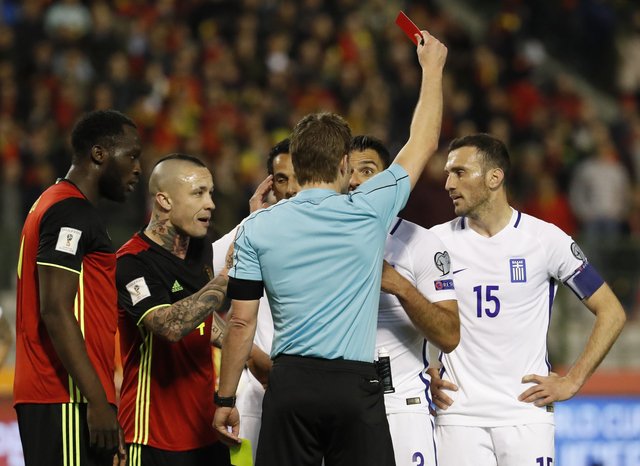 BRUSSELS, March 25 (Reuters) – Romelu Lukaku struck late to rescue a 1-1 World Cup qualifying draw for depleted Belgium on Saturday against a Greek side who were down to 10 men for the final 25 minutes and finished with nine.

Lukaku’s turn and shot in the 89th minute cancelled out the opener from Kostas Mitroglou, who scored just 18 seconds after halftime in the visitors’ first real attack of the game, to keep Belgium top of Group H.

Belgium, missing injured Eden Hazard and Kevin De Bruyne, took advantage of Panagiotis Tachtsidis’s dismissal in the 65th minute for a second yellow card as they subjected the Greek defence to a wave of attacks.

Giorgos Tzavellas was also sent off for a second yellow after a scuffle broke out deep into injury time.

Belgium had destroyed the other four group opponents, scoring 21 goals to just one against, while Greece came into the match undefeated.

Belgium were playing only for the second time since 2012 without both Hazard and De Bruyne, their two most creative forces.

With right-back Thomas Meunier also absent, Roberto Martinez had called the match the biggest test of his near eight-month stint as national coach.

Still, with a free-roaming Dries Mertens and a recalled Radja Nainggolan taking up Hazard and De Bruyne’s positions, Belgium had appeared to be in control, although with only two chances from Marouane Fellaini to show in a dour first half.

Greek cheers and hugs at the end showed their delight with a point away against the group favourites. Belgium lead with 13 points, two more than Greece, with Bosnia on 10.

Bulgaria stayed on course to reach the World Cup finals for the first time since 1998 after Spas Delev gave them a 2-0 win over toothless Netherlands in a Group A qualifier on Saturday with his first international goals.

After the win at the Vasil Levski stadium, Petar Hubchev’s men climbed to third in the group standings with nine points from five matches, one point behind Sweden and four behind leaders France. Netherlands are fourth on seven.

The lively Delev struck twice in quick succession in the first 20 minutes, pouncing on sloppy defending by 17-year-old Matthijs De Ligt, who became the youngest Netherlands player since 1931.

De Ligt, who has started in just two league games for his club Ajax Amsterdam, could not have made a worse international debut as he misjudged Simeon Slavchev’s long pass, allowing Delev to poke the ball beyond keeper Jeroen Zoet after five minutes.

Delev then punished yet more hesitant defending by De Ligt with a thunderous shot from 18 metres midway through the first half. He gave Zoet no chance after De Ligt’s clearance found the head of Georgi Kostadinov, who turned provider.

The visitors enjoyed the lion’s share of possession in the second half as Wesley Sneijder and Wesley Hoedt –- another debutant — came on as substitutes but they failed to convert it into goals though Davy Claasen came close to scoring.

Bulgaria, missing injured keeper Vladislav Stoyanov and midfielders Svetoslv Dyakov and Georgi Milanov, produced another disciplined performance under Hubchev, leaving the Dutch to continue their search for a first win on Bulgarian soil.

Bulgaria visit Belarus on June 9 in their next game in the group while Netherlands host bottom team Luxembourg.