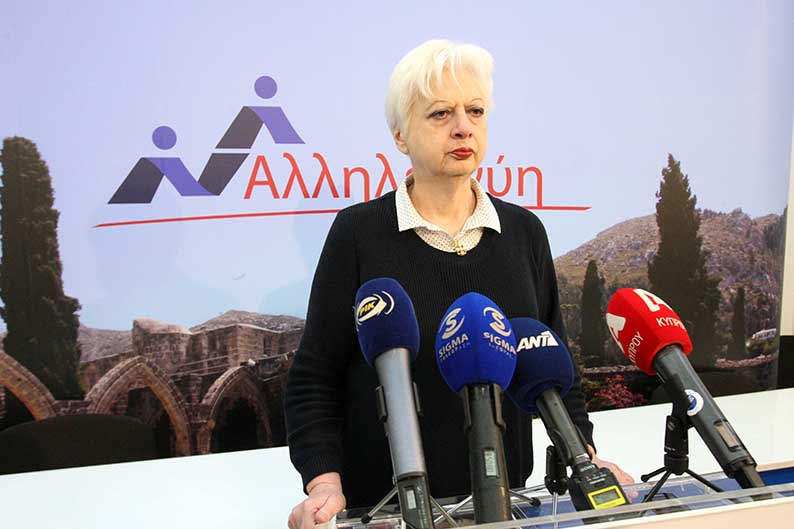 In order to enlighten us as to who we are, Eleni Theocharous informs us that the in-between political space (which includes Elam!) is, in reality the “patriotic space”. The logical conclusion of this claim is that all those who support a bi-zonal, bi-communal federation (BBF) as a settlement, or all those who belong to parties that have identified with BBF, are not patriots but traitors, collaborators, Turk-lovers, Turkish spawn and I do not know what else.

How many times do we have to hear the same epithets being repeated? This is the Elenian marketing of false hope, which has led Cyprus (and other countries) to murder and uprooting people and constitutes an abhorrent political and moral crime against refugees and the overwhelming majority of Cypriots. In a country with a democratic sensitivity and tradition such a claim would have sparked a storm of protests from all the political parties because the contempt it shows for democratic principles is blatantly clear. In Cyprus though, only a few columnists protested.

I am horrified to think what fate would lay in store for us if Theocharous’ party ever came to power. Those peddling patriotism are in effect the ideological descendants of Patakos, Hitler, Stalin and other dictators. The rationale of dictators and terrorist organisations is very interesting because they entertain the delusion that only they and their supporters love their country while the rest are enemies of the nation that must be isolated or eliminated.

This is reminiscent of Eoka B which considered only its members patriots while its critics were “anti-Hellenes”, “traitors”, “anti-enosis” etc. It is reminiscent of the dictator Patakos who repeatedly stressed – even at schools – that only those who supported the “national government” (the junta) were patriots. In the name of patriotism, he and the rest of Greece’s colonels usurped all power, closed down parliament, banned the free press and imprisoned and exiled the “non-patriots”.

It is also reminiscent of Nazi Germany where anyone who did not fanatically support Hitler was considered unpatriotic. If someone, for example, used the greeting “good morning” instead of “heil Hitler” he would suffer dire consequences at the hands of the SS for his “unpatriotic” behaviour. Then there was the Soviet Union under Stalin; everyone now knows what happened to the unpatriotic dissidents. If we look at these examples from history we see that those who monopolised patriotism were ruthless dictators, paranoid megalomaniacs and the exploiters of people’s fears.

People with basic thinking skills understand that the definition of who is and who is not a patriot is arbitrary. According to Theocharous, the patriotic space is that which “does not accept the compromises and concessions (of the Greek Cypriot side) and the vileness of BBF and everything that has been agreed so far”. One from the “unpatriotic” front could, though, argue the opposite – those who have anointed themselves “patriots” display traits such as narcissism, chauvinism, aggressiveness, naivety, masochism and, mainly, thoughtless hatred for others.

And, focusing their fire on the Cyprus problem, BBF supporters could describe the so-called patriots as “traitors” because the only achievable settlement for the benefit of all Cypriots is a BBF, assuming it would ensure a Cyprus with one international personality, single sovereignty, one citizenship and would be compatible with international law, European law and the EU acquis.

If the position of the “patriots” was followed, which is none other than the continuation of the status quo, the consequences would be devastating. Gradually, the occupied area would be assimilated by Turkey and the Turkish army would stay here for good. We would have 200 km-long borders with a powerful, hostile country. In such a case, one wonders how we would defend ourselves in the event of a border incident that could wreak havoc to tourism and, therefore, our economy. Who would prevent millions of Turkish settlers coming to Cyprus over the next decades which could create other problems regarding territory? Would the property and territorial issues not be solved for good at our expense? As for the exploitation of hydrocarbon deposits in the Cypriot EEZ, would it not be extremely doubtful, if not impossible?

Critics of the “patriots” would not stop here. They would also accuse them of having concluded an informal alliance with the Grey Wolves and extreme nationalist supporters of Turkish Cypriot “prime minister” Ozgyrgun who are fiery supporters of partition. Both groups are imbued by patriotism as they understand it. Common target, common struggle, common rhetoric! One group supports keeping half of Cyprus purely Greek while the other group supports keeping the rest of Cyprus purely Turkish.

In conclusion, many political analysts point out that what Theocharous considers “political correctness” is a boomerang for the so-called in-between space. In the eyes of most Cypriots the “patriots” have become a laughing stock because they have turned from accusers to the accused in the always-in-session court of public opinion for pursuing partition and an unholy alliance.

Erdogan’s Nazi slur could lose him the Turkish Cypriots