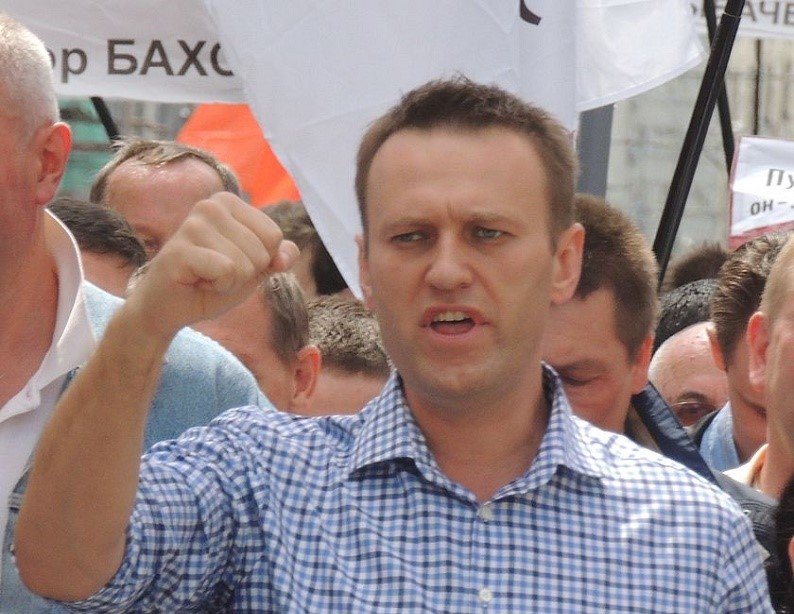 Police detained hundreds of protesters across Russia on Sunday, including opposition leader Alexei Navalny, after thousands took to the streets to demonstrate against corruption and demand the resignation of Prime Minister Dmitry Medvedev.

The protests, reckoned to be the biggest since a wave of anti-Kremlin demonstrations in 2011/2012, come a year before a presidential election that Vladimir Putin is expected to contest, running for what would be a fourth term.

Opinion polls suggest the liberal opposition, which Navalny represents, has little chance of fielding a candidate capable of unseating Putin, who enjoys high ratings. But Navalny and his supporters hope to channel public discontent over official corruption to attract more support.

A Reuters reporter saw police detain Navalny, who hopes to run against Putin, as he walked along central Moscow’s Tverskaya Street with supporters, part of an unsanctioned rally as a police helicopter circled overhead.

Police put Navalny in a truck around which hundreds of protesters crowded, trying to open its doors.

“I’m happy that so many people came out (onto the streets) from the east (of the country) to Moscow,” Navalny said, moments before he was detained.

The Kremlin said on Friday that plans for the central Moscow protest, which the city’s authorities had rejected, were an illegal provocation.

The United States condemned the arrests, saying the action was an affront to democratic values.

“We call on the government of Russia to immediately release all peaceful protesters,” State Department spokesman Mark Toner said in a statement, adding that Washington was “troubled” to hear of the arrest of Navalny.

Grigory Okhotin, one of the founders of OVD Info, a human rights organisation that monitors detentions, said around 600 people had been detained in Moscow on Sunday.

Police said around 7,000 to 8,000 people were on Tverskaya Street and surrounding areas by mid-afternoon and put the number of detentions by late afternoon at around 500.

As evening drew in, hundreds of riot police lined up on Manezh Square at the end of Tverskaya Street and drove protesters away from the Kremlin’s walls. Some opposition supporters on Manezh Square shouted: “Putin is a thief” as tourists wandered nearby.

Navalny called the protests after publishing allegations that Medvedev, the prime minister and former president, had amassed a huge fortune that far outstripped his official salary.

Medvedev’s spokeswoman called the allegations “propagandistic attacks” unworthy of detailed comment and said they amounted to pre-election posturing by Navalny.

Elsewhere, at a rally in the far eastern city of Vladivostok, a Reuters reporter saw 30 people being detained after unfurling banners reading: “The prime minister should answer”.

“I’ve come out (to protest) against corruption and want the authorities to answer the accusations in the Navalny film,” 17-year-old student Denis Korneev said at the Moscow protest.

“In many countries the government would have resigned over this.”

Witnesses told Reuters that four people were also detained at a rally in Yekaterinburg in the industrial Urals region.

On Yekaterinburg’s Labour Square, protesters waved posters reading: “We are the authorities here” while nationalists and supporters of the pro-Kremlin United Russia party looked on.