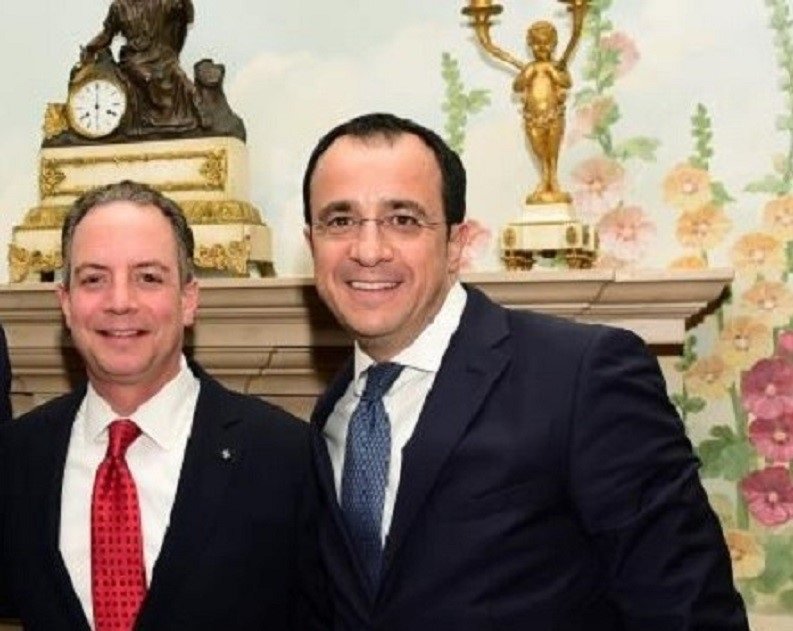 It was high time for a Cyprus-US meeting at the highest possible level, as a recognition of the strategic partnership between the two countries, Government Spokesman Nicos Christodoulides has said ahead of a meeting he will have on Tuesday in Washington with White House Chief of Staff Reince Priebus.

Christodoulides and Priebus already had a discussion on issues of Cyprus interest during a dinner held at Blair House on Thursday evening for Greek Independence Day. He also met on Friday with US Vice President Mike Pence`s adviser on foreign policy issues and with the National Security Council official responsible for Greece, Turkey and Cyprus.

Addressing the Convention of the Federation of Cypriot American Organisations in New York, Christodoulides said a high-level meeting with senior US officials would serve as a catalyst to further enhancing Cyprus–US cooperation, and would serve as a message of Washington’s commitment to regional security in the Eastern Mediterranean and to a solution of the Cyprus problem, which would have a catalytic effect not only for Cyprus but also for regional stability.

In statements to the press later, Christodoulides underlined the importance attributed by the US Administration to the region of the Eastern Mediterranean, Israel, Egypt and Jordan.

He added that in this framework Cyprus was considered an important US partner in the Eastern Mediterranean and the trilateral meetings which have been established among the states in the region were considered particularly important in promoting cooperation and security in the area.

Referring to Turkey, the spokesman said he believes that Washington would wait to see the outcome of April`s referendum in Turkey, both as regards domestic politics as well as other issues such as Syria, Cyprus and the Kurdish issue.

With regard the US-Cyprus relations, he said: “There is a will to enhance our bilateral relations, mainly our economic and commercial ones, as well as on issues of energy and security.”

Commenting on the recent statement by the Turkish foreign ministry on the Cyprus Republic`s actions within its EEZ, Christodoulides said that as in the past the US considers that Nicosia has been exercising its sovereign rights which must be fully respected.

A Turkish statement on Friday that Turkey expects “the Greek Cypriot side, which refuses to accept the Turkish Cypriots as politically equal partners on the island, to refrain from acting as though it were the sole owner of the island’s natural resources and to cease its hydrocarbon-related activities.”
Christodoulides said the Americans, like Europeans, would address any possible developments in the framework of domestic developments in Turkey and according to how the situation will be after April`s referendum.

The spokesman is traveling on Sunday from New York to Washington where he will on Monday attend a conference of the American Israel Public Affairs Committee during which he will speak at a discussion on the developments in the Eastern Mediterranean, the relations of Israel with the EU and issues concerning the states of the region.

In his address to the Convention, Christodoulides expressed hope that the dinner which is expected to take place at the beginning of April between President Nicos Anastasiades and Turkish Cypriot leader Mustafa Akinci would pave the way for Akinci`s return to the negotiating table. But, he pointed out, “we are also realistic on how much can change prior to the referendum in Turkey.”

“We expect that a decision by Mr. Akinci to return to the negotiating table will be substantial and meaningful, and that given that no developments are expected before the referendum in Turkey, post referendum the Turkish side will submit proposals in the negotiations that will be in line with the established framework, and in line with EU law values and principles. In essence what matters is not only that negotiations resume but also, even more important, is that problematic positions such as the ones the Turkish side has been putting on the table and recently, which do not allow any progress, will cease to be presented,” he added.