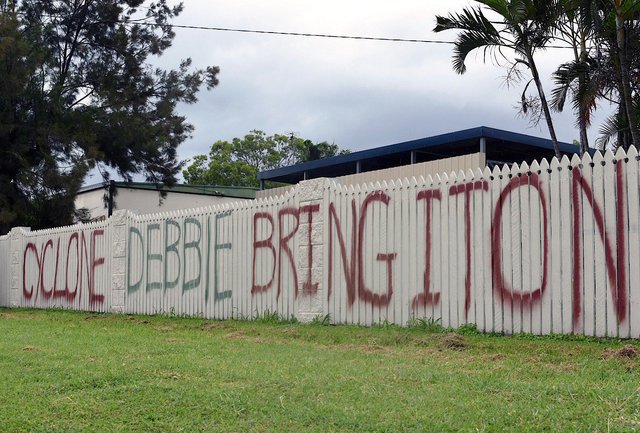 Humour has not deserted the residents of the northern Australian town of Bowen, located south of Townsville

Thousands of Australians fled their homes on Monday as a powerful cyclone bore down on coastal towns in Queensland, where authorities urged 30,000 people to evacuate low lying areas most at risk from tidal surges and winds of up to 300 km per hour (185 mph).

Cyclone Debbie is expected to gather strength before making landfall in the northeast state early on Tuesday, with the Australian Bureau of Meteorology forecasting a category four storm, just one rung below the most dangerous wind speed level.

The growing alarm persuaded the state government on Monday to warn some 25,000 people living in parts of Mackay, a city 950 kilometres (590 miles) north of the state capital Brisbane, to head south to higher ground.

“Because of the intensity of this cyclone … we are very concerned, at the moment, at the prospect of a tidal surge in Mackay,” State Premier Annastacia Palaszczuk told reporters.

“It’s very clear that the time for people to move is now.”

The evacuation from Mackay would be the biggest seen in Australia since Cyclone Tracy struck the northern city of Darwin in 1974.

State authorities had already advised thousands of residents in two townships several hundred kilometres (miles) to the north of Mackay to leave their homes, though some were preparing to ride out the storm.

Television images showed residents in areas around Townsville, about 400km to the north of Mackay, protecting homes and shops with sandbags and plywood boards.

“We’ll just give it a go and rally together,” Cungulla resident Mike Kennedy told the Australian Broadcasting Corporation.

Palaszczuk warned it would be the most powerful storm to hit the state since Cyclone Yasi destroyed homes, crops and devastating island resorts in 2011.

Authorities had set up 15 evacuation centres in safer parts of Mackay to provide shelter for those most endangered and least able to leave, Palaszczuk added.

Far to the north in Townsville, some 3,500 people had left, and authorities asked 2,000 more people in the town of Bowen to also quit their homes.

BHP Billiton suspended operations at its South Walker Creek coal mine, which is just to the south of the cyclone’s expected path. Glencore said it was halting operations at the Collinsville and Newlands coal mines.

Gales were already lashing the tourist resorts at Airlie Beach and the Whitsunday Islands.

Townsville Airport was closed and airlines Qantas, Jetstar, Rex and Virgin Australia said they had cancelled several flights to and from the region scheduled for Monday and Tuesday.

Queensland produces some 95 percent of Australian bananas and while Cyclone Debbie is on course to miss the largest growing regions in the state’s far north, analysts said heavy rains and strong winds could cause significant crop damage.

The cyclone is expected to miss most of region’s coal mines, weather and mining data in Thomson Reuters Eikon shows, and no major dry-bulk vessels are in storm’s path.

Police blamed the wild weather associated with the storm for a traffic accident in which a 31-year-old female tourist died. Police did not give the woman’s nationality.