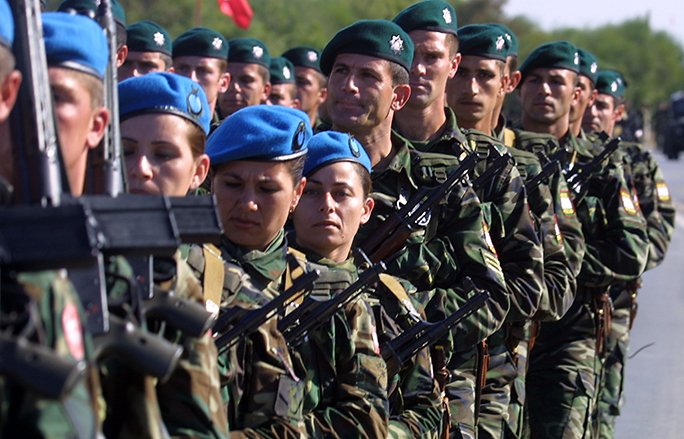 Turkish troops in Cyprus could number as few as 15,000, as opposed to the 40,000 figure commonly cited by Cypriot officials, unofficial estimates based on the number of people registered to vote in the April 16 constitutional referendum suggest.

According to daily Politis, reports from the Turkish-held part of Cyprus say approximately 102,000 people in the north have the right to vote in the plebiscite.

Of these, roughly 35,000 are settlers from mainland Turkey, 25,000 are registered as workers, and 27,000 university students the paper said.

The outstanding 15,000 are understood to be the true number of soldiers and officers manning barracks and outposts in the north.

In fact, this number could be even lower, according to unnamed sources cited by the paper, since it could include military personnel’s wives and civilian staff.

The reduction, the sources claimed, has been the result of the Turkish army’s operations in Syria and an overhaul of the military following last year’s July 15 coup attempt.

A commensurate decrease in the number of tanks in the north has been explained by the Turkish army as “maintenance procedures”, the paper reported.

The United Nations’ Cyprus peacekeeping mission – Unficyp – have previously estimated the number of on-the-ground Turkish troops circa 2010 to have been 25,000, but officially take no position on the issue.

Last March, Turkish Cypriot daily Africa reported that the Turkish army began reducing its forces on the island by one-third due to reallocation of troops to address the trouble then brewing Kurdish areas in Turkey’s south-eastern regions.

Africa’s reports had been neither confirmed nor denied.

Meanwhile, Turkish citizens in the north eligible to vote in the referendum will be able to do so in northern Nicosia only, but ballots will remain open for five days.

Fifteen ballot boxes will be available for 12 hours daily – 9am to 9pm – from April 5 to 9 at a secondary school in Nicosia, said Turkey’s so-called ambassador in the breakaway state.

On April 10, the ballot boxes will be transported to Turkey for counting.

The procedure, it was announced, will be the same for all Turkish voters outside of Turkey, who will be regarded as voting in a single district.

Therefore, a Turkish citizen living in the north of Cyprus but is actually in any other country outside Turkey during the voting dates, will be able to cast a vote in the local embassy, as long as he or she has already registered to vote abroad.

Eligible voters must carry an ID card or any other official photo-ID document issued by the Turkish state.

Melodies for the soul