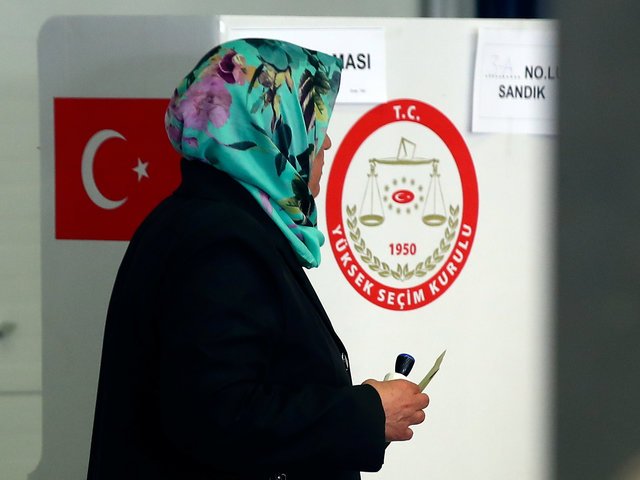 Turkish voters living in Germany cast their ballots on the constitutional referendum at the Postpalast in Munich, southern Germany, March 27, 2017

The controversial vote is taking place amid increasingly strained ties between Turkey and Europe, home to an estimated 2.5 million Turkish citizens eligible to vote.

Bans on some campaign rallies by Turkish officials in Germany and the Netherlands have prompted Erdogan to accuse European leaders of “Nazi methods”.

German Finance Minister Wolfgang Schaeuble said on Sunday Erdogan’s rhetoric was setting back integration in Germany by years and it would take years to repair the damage.

Germany has about 3 million people of Turkish background, including some 800,000 ethnic Kurds. About 1.41 million have Turkish citizenship and are eligible to vote.

Erdogan argues the proposed strengthening of the presidency will avert instability associated with coalition governments, at a time when Turkey is facing terrorist threats. Critics, including European leaders, say it will concentrate too much power in his hands.

Dozens of people lined up outside the Turkish consulate in Berlin to vote as a handful of supporters of Turkey’s main pro-Kurdish opposition party, the Peoples’ Democratic Party (HDP), held up protest signs. One read: “6 millon HDP voters are not represented at the ballot box.”

Several HDP lawmakers have been arrested in Turkey. Some Turkish lawmakers in Germany say they worry that opponents of Erdogan will refrain from voting to avoid repercussions for themselves or their families back home.

“Let them think what they would like to think,” he said, gesturing at the protesters.

“But we are sticking together for Turkey and the future of the Turkish Republic … we are here to support the stability of our country.”

Tarik Demir, a construction worker in Berlin, also supported the measures. “The AKP (Erdogan’s ruling party) has made positive changes in Turkey. They’ve implemented social benefits, they built many houses and streets,” he said.

Demiral Sadet, a retired bank employee, said many of her friends were apprehensive about returning to Turkey until they saw the outcome of the vote.

“Erdogan is running everything. Why should he have more power?” she asked.

Melahat Yildiz was also against the changes.

“Until the end will I say no, for my country because I love my country, for the future, for my Turkey and for my grandchildren and for all the children in Turkey I will say no.”

In Munich, Metin Cagli, from Rosenheim, said the constitutional proposals would give Erdogan too much power.

“We’re against a dictatorship. We want … the best for our country. We are social democratic people,” he said.

In Germany, voting will take place from March 27 to April 9, with sealed ballot boxes then flown to Ankara to be counted on the evening of April 16, when people in Turkey vote.

France has just over 318,000 Turks eligible to vote and the Netherlands nearly 245,600. Austria, Belgium, Britain and Switzerland also have sizeable Turkish communities.