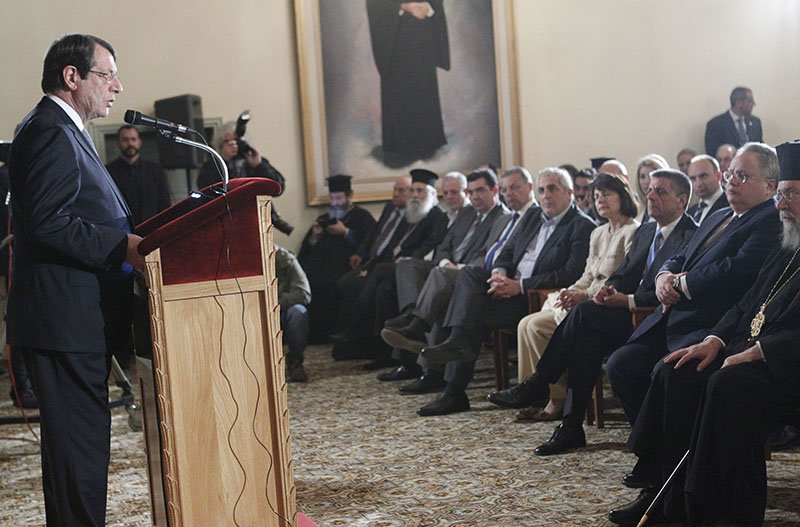 If the agenda at Sunday’s dinner with Turkish Cypriot leader Mustafa Akinci is discussion of confidence-building measures the effort to resuscitate the stalled peace talks is doomed, President Nicos Anastasiades said on Tuesday.

Speaking at an event marking the anniversaries of the March 25, 1821 Greek revolution and the start of Eoka’s struggle against the British on April 1, 1955, at the Archbishopric, Anastasiades said as the Greek revolution sparked the “rebirth” of the Greek nation, so had the 1955-1959 struggle for the Greek Cypriots.

“The struggle led, for the first time in our history, to having our own independent state – even if this wasn’t the goal of Eoka’s heroic fighters – that would distinguish us and legitimise us in the international state of affairs,” the president said.

“The Greeks of Cyprus had never before considered our place in the world as an independent state. Which is why we walked a tightrope between desire and reality, the ideal and the possible, failing to create those bridges that would have allowed us to capitalise on our new state of being.”

Today, as the leadership collectively, we have the maturity and courage to acknowledge the mistakes we made and reflect on the course we must take, he added.

“The Republic of Cyprus is our shield against efforts to partition our country, our defence on every diplomatic and political level, and an inseparable part of our own identity,” Anastasiades said.

“We are the Greek citizens of the Republic of Cyprus, and since 2004 our identity also includes the concept of European citizen. We do not deny, nor have we ever denied, that the same rights belong to our Turkish Cypriot compatriots, as long as, through dialogue, we finally manage to find a solution that evolves the Republic of Cyprus into a modern European state, fully functional and viable.”

Referring to the ongoing crisis that has derailed negotiations with Akinci for a comprehensive settlement, Anastasiades said

“Sunday’s social dinner provides an opportunity to decide on the way forward.

“I want to make clear that, if the goal or the aim is to discuss confidence-building measures, the effort by those who seek to create the conditions for a fruitful dialogue to restart is doomed,” the president said.

“Should we discuss confidence-building measures, for example the Navtex Turkey issues on a daily basis? Or like the celebration of July 20, when they invaded Cyprus? Or November 15, 1983?”

At last, the president said, our handling of the crisis must be appreciated.

“But at the same time, as I have told the Turkish Cypriot leader, he too must realise that similar, if not more acute, sensitivities exist for those who, by his own admission, were the victims of the Turkish invasion,” Anastasiades argued.

“Therefore, it is not possible for a mere reference to a historical fact that took place 67 years ago to be considered a source of crisis, while ignoring their own actions, which literally provoke those who lost their ancestral homes, their lives, their belongings, those still missing.”

The solution being sought at the talks, he added, is one that addresses the concerns of both communities and creates prospects for prosperity and the conditions for us and the Turkish Cypriots as true European citizens.

“Not through violations of the acquis communautaire, not through the acceptance of conditions not conducive to functionality – like, for instance, the demand for a positive vote by a Turkish Cypriot for every decision,” he said.

MPs at loggerheads over use of Turkish Cypriot properties