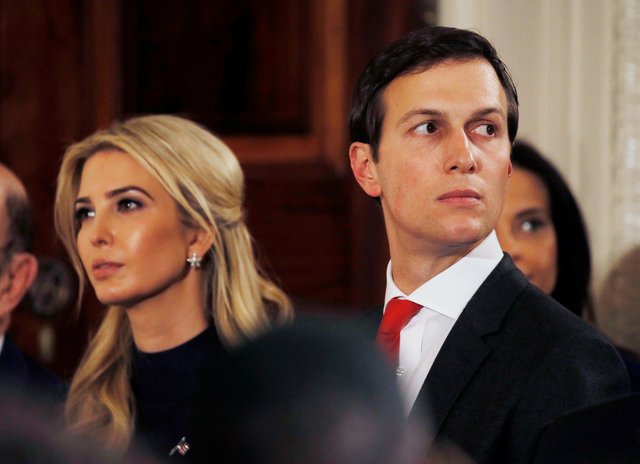 US President Donald Trump’s son-in-law, Jared Kushner, already a White House senior adviser, will take on the additional task of overseeing an effort to overhaul the federal government, the White House said on Monday.

Kushner, who is married to Trump’s daughter Ivanka Trump, will lead a White House Office of American Innovation to leverage business ideas and potentially privatise some government functions as the White House pushes to shrink government, cut federal employees and eliminate regulations.

“This office will bring together the best ideas from government, the private sector, and other thought leaders to ensure that America is ready to solve today’s most intractable problems,” Trump said in a memorandum creating the office that includes about a dozen White House officials.

Trump, who campaigned on a pledge to “drain the swamp,” has enacted a hiring freeze for most civilian federal jobs and proposed massive cuts in US domestic agencies that could shrink the size of government by thousands of workers.

The Republican president has also proposed sweeping cuts in government regulations and plans to sign an order on Tuesday rolling back some energy regulations.

“We have a lot more coming,” he said on Monday at a ceremony signing bills to repeal four regulations, vowing to eliminate every “job-killing regulation that we can find.”

A number of recent presidents including Bill Clinton, George W Bush and Barack Obama had mixed success with their own initiatives to reinvent or streamline government using suggestions from the private sector.

Kushner has been a regular presence at his father-in-law’s side and was earlier cleared by the Justice Department to serve as a White House senior adviser even as Democrats raised concerns about potential conflicts of interest.

He has been given a wide range of domestic and foreign policy responsibilities, including working on a Middle East peace deal. He will continue to serve in the other roles even as he takes up the new duties, the White House said.

Last week, Ivanka Trump received her own office in the White House along with access to classified information and a government-issued phone. Aides had said earlier she would not take on a role in her father’s White House.

The Washington Post quoted aides as saying she would collaborate with Kushner‘s innovation office but would not have an official role.

Among past efforts to overhaul the way Washington works, Clinton in 1993 called for “reinventing government.” His reforms led to a slower pace of federal hiring, reducing the federal workforce by 240,000 jobs and closing small offices. Congress did not agree to some of the more aggressive cuts.

Bush proposed government management reforms, but ended up focusing largely on restructuring national security agencies after the Sept 11, 2001, attacks, folding many agencies into the new Department of Homeland Security.

Obama in 2012 proposed closing the Commerce Department and creating a new export agency, saving $3bn over 10 years and cutting 1,000 plus jobs. His plans failed to get congressional approval.