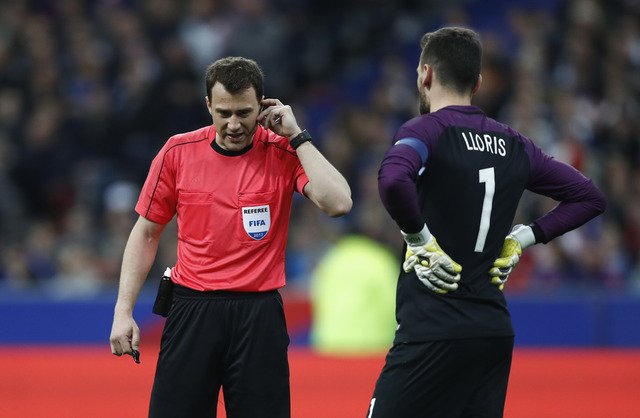 Spain’s Gerard Deulofeu scored one and created another but had to share the limelight with the video assistant referee in a 2-0 friendly win over France in Paris on Tuesday.

David Silva put the visitors ahead from the penalty spot on 68 minutes after Deulofeu was fouled in the box by France defender Laurent Koscielny.

Deulofeu, who is currently on-loan at AC Milan, then converted a Silva cross nine minutes later, but his celebrations were briefly curtailed by an offside flag. The goal, however, was awarded after German referee Felix Zwayer asked the video assistant to check the decision.

Video technology had already played a key role in the match after France striker Antoine Griezmann, who plays in Spain with Atletico Madrid, had hit the back of the net with a header early in the second half.

His effort, however, was disallowed after replays showed defender Layvin Kurzawa, who was involved in the move, was offside.

The game really came to life in the second half and will no doubt feed the debate on the use of video technology, which is currently being tested ahead of the 2018 World Cup in Russia. Tuesday’s match was the first time it had featured in an international in France.

“If the final decisions are correct, then why not, but it does change football a bit,” said France coach Didier Deschamps.

“It played against us tonight but I guess it will be the same for everybody. That’s the way football is going and we need to adapt to it,” he added.

Les Bleus, relying on a somewhat experimental side with midfielder Corentin Tolisso winning his first cap and teenage winger Kylian Mbappe starting for the first time, shone only on occasions against a Spain side who exited Euro 2016 in France at the last-16 stage.

With their hosts looking nervous, Spain dominated for large spells but were toothless in attack and had only a couple of shots on target in a relatively dull first half.

Spain survived a few early scares with Mbappe failing to catch keeper David De Gea off guard with an angled shot, while a Koscielny header was cleared off the line by Gerard Pique.

France, who have plenty of potential up front but created few clear chances while again looking shaky at the back, failed to thrill the home crowd, three days after they beat Luxembourg 3-1 to stay top of World Cup qualifying Group A. They resume their campaign with a trip to Sweden on June 9.

Mothers of the world in one opera

Federer in, Wawrinka out on mixed day for Swiss