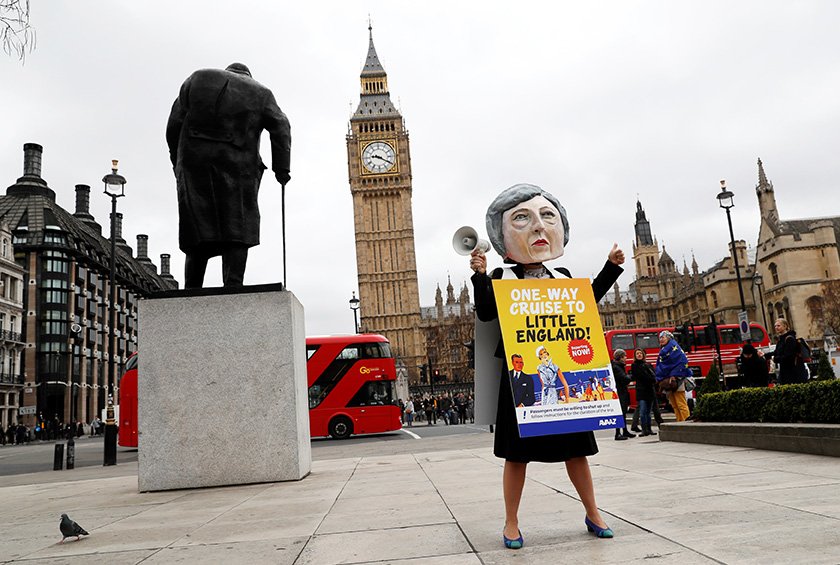 On March 29 British Prime Minister Theresa May will begin Britain’s exit from the European Union by invoking Article 50 of the Lisbon Treaty.

It will start a two-year process of departure – and for now, we know little about what that will look like. When its members signed the Treaty in December 2007, no one could imagine circumstances in which a nation would leave.

On one extreme, Britain could crash out of the EU without any deals on trade, migration or other substantive issues. Or it could agree to a “hard Brexit”, regaining the right to limit EU migration within its borders, but losing access to the single market.

Brexit might also break the United Kingdom apart, prompting Scotland and Northern Ireland to leave. Both voted overwhelmingly for “remain”, and Scottish First Minister Nicola Sturgeon has made clear that the “harder” the Brexit, the more Scotland will push for a second independence referendum, even in the face of opposition from London.

Alternatively, things could barely change at all. Earlier this month, British officials were reportedly working on an interim deal that would lock current trade and migration rules in place for 10 years, extending the two-year exit path defined in Article 50.

That could have the advantage of avoiding economic shocks, perhaps even extending the process indefinitely. But it would infuriate many on both sides of the argument.

May will ultimately determine how Brexit plays out. She is a canny operator who will likely be motivated by what she thinks is politically wise. But that’s difficult to determine, not least because it’s unclear what voters want.

A March 21 poll showed 44 percent of respondents would vote “leave” and the same portion “remain” if the referendum were held again tomorrow. Roughly 12 percent said they “don’t know”. Those proportions have barely changed since last summer.

Some of the more fervent pro-Europeans – such as the thousands who protested Brexit on Saturday – still hope the decision can be overturned. Two thirds of “remain” voters now believe there should be a second referendum, a significant increase from December. But that seems unlikely, at least for now.

Exactly what the prime minister thinks of Brexit is a matter of speculation among Britain’s political class. Officially, she campaigned for “remain” – but members of that campaign say she was reluctant to take a significant role.

As home secretary, she embraced a tough stance on immigration, but because of Britain’s EU membership had no control over arrivals from Europe. Now, she seems to believe – probably rightly – that a desire to reduce immigration to Britain was a prime motivator behind the “leave” vote.

It’s a difficult balance. Britain’s foreign workers – many of whom came from Europe after borders opened in 2004 – are vital to whole swathes of the economy, not least public services such as healthcare.

There is a basic political calculation here. While only a limited majority of May’s Conservative party voters chose “Brexit”, for years the Conservatives have been losing ground to the anti-EU United Kingdom Independence Party (UKIP). With UKIP now suffering its own internal political crisis, May sees a chance to reverse that trend by embracing Brexit and winning back its supporters.

The problem, though, is that at the time of the referendum, Brexit meant different things to different people. The 52 percent of the population who chose it were expecting very different things – and some may be unhappy with whatever materializes.

May’s preferred option – somehow limiting freedom of movement while maintaining access to free trade – is unlikely to be on the menu. European leaders say both are central to the European project, and Britain cannot have one without the other.

Those stances – like May’s own, which has increasingly trended towards a relatively “hard Brexit” – are opening negotiating positions, and could change. The worry for Britain is that European leaders may wish to exert a high price for Brexit to deter other states from following in future.

The Scotland factor may also be crucial. No prime minister wants to be remembered as the one who broke the U.K., a possible incentive for May to water down Brexit to keep the Scots on board.

There are signs Brexit will be less disastrous than some anticipated. The nine-month period between the referendum and the triggering of Article 50 has mollified some of the more alarming predictions of economic collapse. The stock market remains buoyant and unemployment has fallen – although the weaker currency has boosted inflation and made life more expensive.

But the ongoing sense of uncertainty does real harm. Millions of people, particularly EU nationals living in Britain or British citizens abroad, are facing colossal uncertainty. The roughly 3 million Europeans in Britain must make decisions on jobs, housing, relationships and dozens of other things without any real clarity on where they will stand in as little as two year’s time.

The same is true for employers. Several firms – particularly those in the financial services sector – have signaled that they are considering moving jobs to mainland Europe, worried about losing market access.

May has never won an election and she does not intend to call one until Brexit is out of the way, most likely until 2020.

That leaves her running on a mandate from David Cameron. He won by pledging a once-in-a-lifetime EU referendum – but also promised that if the country chose to leave, it would be a disaster.

He delivered on the first. May will have to avoid delivering on the second.