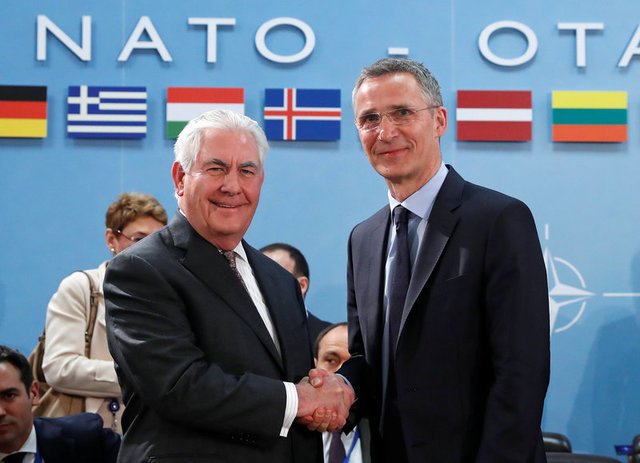 Germany said on Friday that Nato’s agreed target spend of two percent of members’ yearly economic output was neither “reachable nor desirable” countering a call by US Secretary of State Rex Tillerson for all allies to comply and quickly.

The United States provides nearly 70 per cent of Nato’s budget and is demanding that Nato allies make clear progress towards the agreed target this year. Only four European Nato members – Estonia, Greece, Poland and Britain – have done so.

“Two percent would mean military expenses of some €70bn. I don’t know any German politician who would claim that is reachable nor desirable,” Germany’s Foreign Minister Sigmar Gabriel said at the first Nato meeting attended by Tillerson.

Tillerson, however, reiterated Washington’s demands and said allies will need to pay up or outline plans for how they plan to meet the threshold when Nato leaders meet on May 25 for the first top-level summit of the alliance. US President Donald Trump will attend that meeting.

“Our goal should be to agree at the May leaders meeting that by the end of the year all allies will have either met the pledge guidelines or will have developed plans that clearly articulate how…the pledge will be fulfilled,” Tillerson said.

“Allies must demonstrate by their actions that they share US governments commitment.”

In Berlin, German government spokesman, Steffen Seibert, said the government was committed to increasing defence spending and would continue to do so “because we know it is necessary and makes sense to further strengthen our armed forces”.

Members have until 2024 to comply with the spending target.

Tillerson did however offer assurances of Washington’s commitment to Nato during his brief stop in Brussels, although US officials said he did not have time for one-on-one meetings, which are customary during such meetings.

Trump has criticised Nato as “obsolete” and suggested Washington’s security guarantees for European allies could be conditional on them spending more on their own defence. He has also said he wants Nato to do more to fight terrorism.

“The United States is committed to ensuring Nato has the capabilities to support our collective defense,” Tillerson said at the meeting in Brussels. “We will uphold the agreements we have made to defend our allies.”

Tillerson said the Nato alliance was fundamental to countering Russian aggression, in particular in Ukraine. A meeting on Thursday between ambassadors from Nato and Russia called on Moscow to do more to rein in armed separatists battling Kiev’s forces.

He said the ministers would discuss “fair burden sharing to keep the trans-atlantic bond strong” and “stepping up Nato efforts to project stability and fight terrorism”.

Stoltenberg confirmed ministers would discuss national defence spending plans on Friday as the bloc seeks to respond to the new, harsher tone from across the Atlantic, which has galvanised European Nato allies.

Though Washington offered reassurances, Tillerson’s initial decision to skip his first meeting with Nato foreign ministers had reopened questions about the Trump administration’s commitment to the alliance. The meeting was later rescheduled.