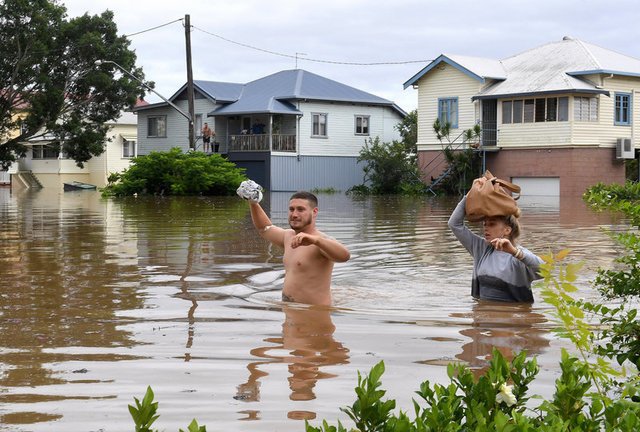 Swollen rivers flooded entire towns along Australia’s east coast on Friday, cutting roads and leaving residents clinging to roofs and floating down streets in boats after the remnants of a powerful cyclone swept through the region.

Flood sirens sounded before dawn at Lismore when the Wilsons River surged over the town’s levee. By daybreak the centre of the town of 25,000 people in the Northern Rivers region of the state of New South Wales (NSW) was underwater.

Water was at roof level and cars, bins and other debris washed down streets, as residents fled and farmers drove their cattle to higher ground.

The aftermath of Cyclone Debbie, which pounded Queensland state on Tuesday, smashing tourist resorts, bringing down power lines and shutting down coal mines, has become a huge rain depression.

No deaths were reported so far from the storm, but there are still fears that fatalities may emerge after emergency workers logged more than 100 flood rescues during the night. Gales and huge surf swells lashed the coast around Cape Byron.

“I suspect there may be people that may have perished overnight as a result of those conditions,” said NSW State Emergency Service Deputy Commissioner Mark Morrow told ABC.

Authorities have ordered almost 20,000 people to evacuate to higher ground across parts of southern Queensland and the neighbouring NSW, where thousands of schools also shut.

At Murwillumbah, a NSW town of 8,000 people, weather forecasters said the major Tweed River was beyond its banks and running higher than ever previously recorded.

“The water’s the highest I’ve ever seen it, heaps of shops are closed and most places shut at midday yesterday and everyone went home while they still could,” Natasha Bolden told Reuters from the Murwillumbah Golf Club.

“The south side is underwater,” she said.

In the cyclone-hit zone further north in Queensland, holidaymakers evacuated resort islands along the world-famous Great Barrier Reef, where the storm was strongest.

Miners Glencore and BHP, said they were still assessing the extent of any disruption to coal shipments.

Queensland’s top insurers, Suncorp Group Ltd and RACQ, said it was too early to put a dollar figure on the damage.