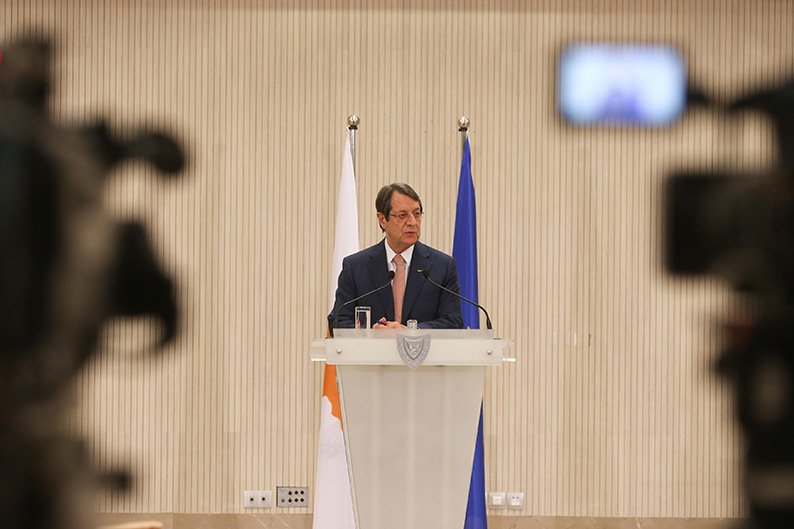 JUST 48 hours before an unofficial dinner between the two leaders in an attempt to re-start stalled negotiations and help restore lost trust, President Nicos Anastasiades launched a blistering attack on the Turkish side’s positions that appeared to leave little room for compromise.

Addressing students and professors from the National Kapodistrian University of Athens, at the presidential palace in Nicosia, Anastasiades, appearing irritated, said if the Turkish Cypriot side insisted only on discussing confidence building measures at the dinner they should at least change their stance as regards what that meant.

“The best confidence building measure would be through specific proposals to show respect to the concerns of the Greek Cypriots, especially as regards [Turkish] guarantees,” he said.

Anastasiades said the problems that arose in the talks came about due to Ankara’s influence on Turkish Cypriot leader Mustafa Akinci, who he said walked away from the talks citing the House vote for schools to mark the 1950 Greek Cypriot referendum for Enosis, union with Greece.
Anastasiades said Akinci’s position was that on Sunday they should only discuss confidence building measures and nothing of substance until the House withdraws the amendment. A compromise vote handing over school commemorations to the education ministry is due at the plenum next Friday, five days after the dinner, which means Akinci is unlikely to commit to new talks before he is satisfied with the outcome of the new vote.

Giving a rundown on the talks, Anastasiades said that when he began talks with Akici “it was a basic principle of our understandings that any solution would have to be balanced, responsive to the concerns and aspirations of both communities and never ignores the [EU] acquis, given that it was agreed that Cyprus will remain member of the EU and so must meet the prerequisites required for a member state.”

“But unfortunately over time, Turkish influence created a different attitude from the Turkish Cypriots, and it is with great regret and disappointment I say, their current positions do not serve either the Greek Cypriot or the Turkish Cypriot communities but are primarily designed to enable Turkey to become a  regulator of what will be decided by the [federal] government,” he added.

Anastasiades said that in the early stages of the talks they observed significant convergences that allowed an optimism that the climate had finally changed and that the leaders saw the prospects for ending the unacceptable situation on the island, even despite the differences.

He said that when the leaders returned from Geneva he suggested that due to difficulties that might occur due to the constitutional referendum in Turkey this month, negotiations could slow down so that Turkey could act on Cyprus free from the influences of the referendum.

“The answer of Mr Akinci was that the talks would not be affected, and of course the opposite has been proved,” said Anastasiades, adding that, Akinci turned around and used the Enosis vote as an opportunity to leave the table.

“Unfortunately, he found that he could humiliate the Greek Cypriot side claiming that it had an obligation to correct the mistake,” he added.

Anastasiades said he told Akinci he could not change the vote and in any case “I told him I did not react nor stop the dialogue when celebrations were held [in the north] for the day of the invasion, the proclamation of the pseudostate, the time difference, or the occupation flag on the Pentadaktylos,” the president said.

Anastasiades also referred to his proposal for the triptych – a document on differences and convergences – but said the Turkish Cypriot side did not respond positively to this proposal.

He also referred to the demand of the Turkish side for the EU four freedoms for Turkish nationals post-solution and said this would mean “occupation of Cyprus by peaceful means”.

Everything that has happened recently, he added, proves the hypocrisy of the Turkish side.

“What matters now is what happens on Sunday,” he said.

“At the same time I want to make clear that I am not willing to put before the Greek Cypriots a plan that they will be obliged to reject because of unjust provisions which would create a dysfunctional state, a hybrid state that would be unable to meet its obligations as an EU Member State, a state which accepts human rights violations or discrimination such as to render or to convert the so-called policy of equality  in a way that would mean the rights of the few would govern the many.”

A Greek Cypriot’s vision for Cyprus