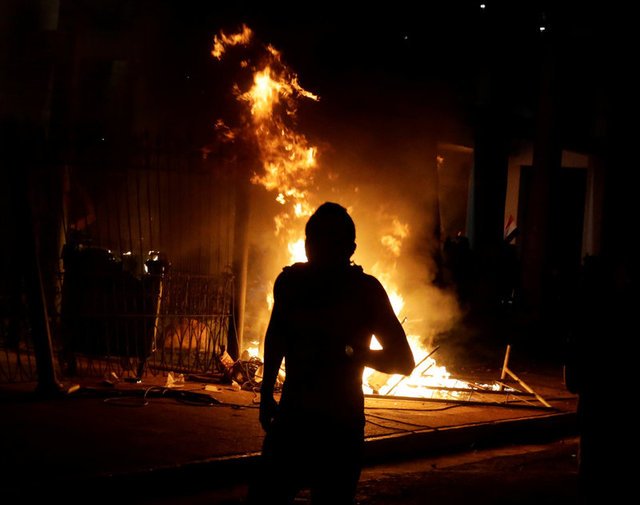 Protesters stormed and set fire to Paraguay’s Congress on Friday after the Senate secretly voted for a constitutional amendment that would allow President Horacio Cartes to run for re-election.

The country’s constitution has prohibited re-election since it was passed in 1992 after a brutal dictatorship fell in 1989.

“A coup has been carried out. We will resist and we invite the people to resist with us,” said Senator Desiree Masi from the opposition Progressive Democratic Party.

Firefighters managed to control the flames after protesters left the Congress building late on Friday night. But protests and riots continued in other parts of Asuncion and elsewhere in the country well into the night, media reported.

Several politicians and journalists were injured, media reported, and Interior Minister Tadeo Rojas said several police were hurt. One member of the lower house of Congress, who had been participating in protests that afternoon, underwent surgery after being hit by rubber bullets.

The number of casualties was unknown.

Cartes called for calm and a rejection of violence in a statement released on Twitter.

“Democracy is not conquered or defended with violence and you can be sure this government will continue to put its best effort into maintaining order in the republic,” he said.

“We must not allow a few barbarians to destroy the peace, tranquillity and general well-being of the Paraguayan people.”

The unrest coincides with a rare high-level international event in the landlocked South American country. Thousands of businessmen and government officials descended on Asuncion this week for the Inter-American Development Bank’s annual board of governors meeting.

While Paraguay long suffered from political uncertainty, the soy and beef-exporting nation has been attracting investment in agriculture and manufacturing sectors in recent years as Cartes offered tax breaks to foreign investors.

Instability in the country of 6.8 million is a concern for its much larger neighbours Brazil and Argentina.

The Office of the United Nations High Commissioner for Human Rights said it was monitoring the events.

“I call on political leaders to avoid inciting violence and seek dialogue,” the commission’s regional representative for South America, Amerigo Incalcaterra, said in a statement.

The Senate voted earlier on Friday during a special session in a closed office rather than on the Senate floor. Twenty-five lawmakers voted for the measure, two more than the 23 required for passage in the 45-member upper chamber.

Opponents of the measure, who claim it would weaken Paraguay’s democratic institutions, said the vote was illegal.

The proposal will also require approval by the House, where it appeared to have strong support. A vote which had been expected early on Saturday was called off until the situation calmed down, said the chamber’s president, Hugo Velazquez.

Several Latin American countries, including Paraguay, Peru and Chile, prevent presidents from running for consecutive terms in a region where memories of dictatorships remain ripe.

Others, including Colombia and Venezuela, have changed their constitutions to give sitting presidents a chance at re-election.

Paraguay’s measure would apply to future presidents and Cartes, a soft-drink and tobacco mogul elected to a five-year term in 2013.

His strongest backers want him to be allowed to run for another term, but critics have said a constitutional change aimed at benefiting a sitting president would be unfair.

The change would also apply to former President Fernando Lugo, whose supporters want to be allowed to run for another term.

A similar re-election proposal had been rejected in August and Congress this week voted to change the rules that required lawmakers to wait a year before voting again.

“Everything was done legally,” said Senator Carlos Filizzola of the leftist Guasu Front coalition, which supports the constitutional amendment as a way of allowing Lugo to return as Paraguay’s leader.

Federer outlasts Kyrgios to set up Nadal final in Miami