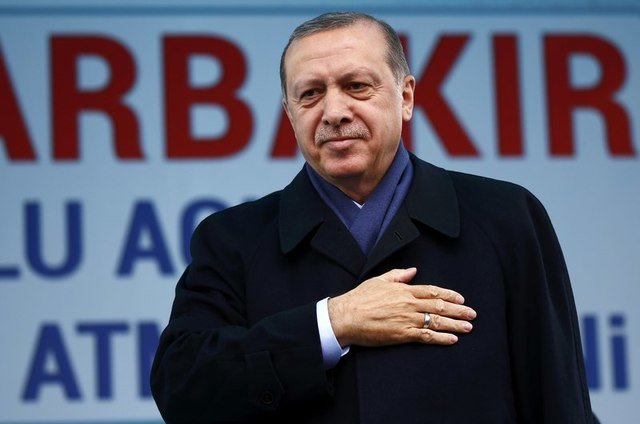 President Tayyip Erdogan described himself as a “guardian of peace” on Saturday as he called on Kurds in conflict-torn south-east Turkey to vote ‘yes’ in a referendum in two weeks time on reforms that would grant him sweeping new powers.

Since the collapse of a two-year-old ceasefire in July 2015, the mainly Kurdish south-east has been rocked by some of the most intense fighting in three decades of conflict between Kurdish militants and Turkish security forces.

According to a United Nations estimate, about 2,000 people were killed and up to a half a million displaced in the state’s conflict with Kurdistan Workers Party (PKK) militants.

The pro-Kurdish Peoples’ Democratic Party (HDP), strongly supported in the south-east but cast by Erdogan as an extension of the PKK, was among the targets of the president’s ire during a rallying speech in the region’s largest city Diyarbakir.

“These supporters of the PKK keep on saying ‘peace, peace, peace’. Does empty talk bring peace? Could there be peace with those who walk around with weapons in their hands?” he said.

The ruling AK Party, which Erdogan founded, also has strong support in the south-east. In a close race, pollsters say Kurdish voters, about a fifth of the electorate, could tip the balance in the April 16 referendum.

The HDP opposes the constitutional reform but its ability to campaign has been devastated by a crackdown which has led to the jailing of its leaders, a dozen of its MPs and thousands of its members on charges of PKK links. The state has taken over municipalities which the HDP had hitherto run.

The HDP denies direct links to the PKK, seen as a terrorist organisation by Europe, the United States and Turkey.

“We are ready to talk, to walk together with everyone who has something to say or has a project,” Erdogan said. “We have one condition. There will be no guns in their hands.”

Erdogan says Turkey needs a strong presidency to avoid the fragile coalition governments of the past. His critics cite the arrest, dismissal or suspension of more than 100,000 teachers, civil servants, soldiers, judges and journalists since a failed coup last July as evidence of his authoritarian instincts.

Braving nationalist anger, Erdogan introduced tentative reforms on Kurdish rights and in 2012 launched negotiations to try to end a PKK insurgency that has killed 40,000 people since 1984. But a ceasefire collapsed in July 2015 and fighting flared anew.

EasyJet flight diverted to Turkey then Athens before landing in Paphos