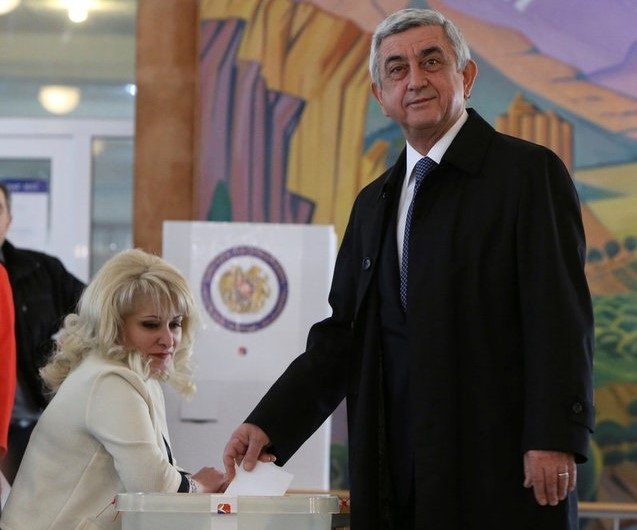 Armenians voted for a new parliament on Sunday in a closely fought race between the ruling party and a former coalition partner that heralds the start of a parliamentary system of government.

Under constitutional changes critics say were designed to prolong the political life of President Serzh Sarksyan, parliament, not voters, will elect the president for the first time. That role will become largely ceremonial while the office of prime minister will become more powerful.

Voting got under way at 0400 GMT and would last until 1600 GMT in the country with about 2.6 million eligible voters.

Sarksyan, the 62-year-old leader of the ruling Republican Party of Armenia (RPA), has repeatedly denied that the changes, which were approved by the electorate in a December 2015 referendum, were made for his benefit.

He has been president since 2008 but his second term expires next year. Under the new system, critics say, he could keep wielding executive power by becoming prime minister, stay active by remaining leader of the RPA or quit politics but keep exercising influence via a handpicked successor.

The outcome of Sunday’s vote was difficult to predict, with polls showing the RPA neck-and-neck with an opposition alliance led by wealthy businessman Gagik Tsarukyan.

His alliance has ruled in coalition with the RPA before, but it is not clear whether it would agree to do so again if, as expected, it fails to win enough support to rule alone.

The ruling party still wields considerable support and its main campaigner, Prime Minister Karen Karapetyan, who was appointed in September, is a popular figure and the RPA candidate for the post of the prime minister after this vote.

“I’m very optimistic, but time will show (who will win),” he said after voting.

Many Armenians, however, accuse the government of corruption and of mishandling the troubled economy.

Armenia depends heavily for aid and investment on Russia, which has been hard hit in the past three years by an economic downturn. Armenia has felt the impact, with growth falling to 0.2 percent last year from 3.0 percent in 2015.

“Voters should vote for (our) party, which will change laws and will change life,” Tsarukyan said after voting at a polling station in his native town of Abovyan, about 20 km north-east from the capital Yerevan.

“Economic growth is impossible in the current situation.”

Political analysts say unrest could erupt after the vote, partly due to a growing malaise over the economic slowdown.

“The situation is especially tense, due to the deepening level of discontent and dissent,” said Richard Giragosian, director of the Regional Studies Centre in Yerevan.

Valuables worth over 35,000 euros burgled from Limassol home