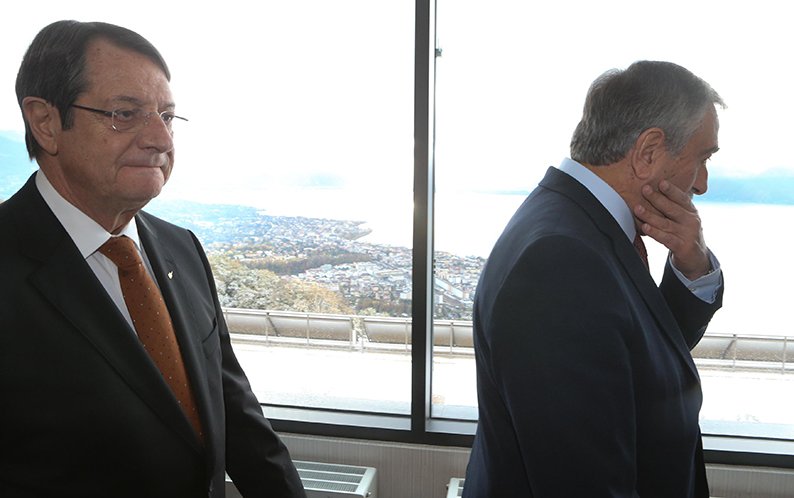 WHAT matters is not whether President Anastasiades and Mustafa Akinci decide to resume the talks at tonight’s dinner. The real issue is whether either of them possesses the real desire and determination to take the decisions that are necessary to reach a settlement.

If these two qualities do not exist, there is no justification for resuming the talks. After all, if the talks continue for the sake of the process for a few more months, this only means the continued mockery and underestimation of the intelligence of all those from both sides of the dividing line who still sincerely support a settlement.

Personally, I have no doubt that that this determination does not exist, at least on our side. I refer to our side because the right thing is always to look at yourself first. If we discover that we are in the wrong, there is no reason to waste time dealing with others.

As I wrote last Sunday, it has been proved that Anastasiades is not the man of big decisions. He is desperately lacking in the political courage that is essential for taking such decisions. For the last two years his participation in the talks has been restricted to uttering fine words and hopes. When the time for decisions arrives he finds excuses and pretexts to stop the process. His own handling and delaying tactics have unfortunately brought him to just 10 months away from the presidential elections and this makes his unwillingness to engage in talks even stronger.

Anastasiades really would have liked to be the politician whose name was linked to the solution of the Cyprus problem. Sadly, he has trapped himself – thanks to his clumsy manoeuvres, contradictions and rhetoric of the last two years – so badly that it is impossible to expect him, in view of the elections which are now his main concern, to take the brave and daring decisions that are needed to agree on a settlement. He is a prisoner of his declarations and the ‘red lines’ he so thoughtlessly drew, as recently as a few months ago.

Edek leader Marinos Sizopoulos is now craftily urging him to hold a referendum so that the people can supposedly decide whether they accept rotating presidency, Turkish troops remaining after a settlement, the gradual abolition of guarantees and the presence of Turkish settlers etc. Of course Sizopoulos does not represent the population. As one newspaper columnist pointed out, the call for a referendum was being made by the leader of a party that in the last parliamentary elections secured the least number of votes in its history.

But it is also true that the president with his scheming has reached the point which gives Sizopoulos and the other leaders of rejectionism the right to peddle their sterile patriotism. The biggest damage caused by Anastasiades in terms of a settlement is that through his scheming, his prevarication and cowardice he managed, after almost two years of negotiations, to reach a stage where even the supporters of compromise deal have started to wonder whether the rejectionist front was right all along.

This has happened because, in his efforts to avoid taking decisions and making the talks process drag on, he has been obliged to resort to shifting all the blame for the deadlock onto Akinci and the Turkish side. To this end he has even used arguments that are very similar to those we hear from Papadopoulos, Lillikas and Sizopoulos.

Under these circumstances, I do not think that any optimism would be justified even if the leaders agree tonight to resume the talks, because the probability of them leading to anything better than what we have witnessed so far is very low indeed. From the moment political will does not exist, it is better to have no hopes and so avoid another disappointment.

Britain can still pull back from EU divorce

Flowers: everyone has a favourite