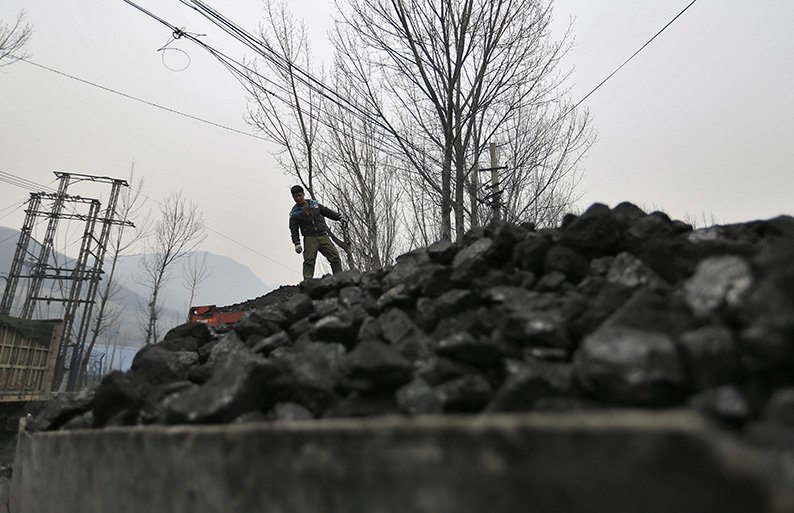 A coal mine in China which remains committed to big cuts

“My administration is putting an end to the war on coal,” said Donald Trump, surrounded by the usual gaggle of officials and (in this case) coal-miners, as he put his super-size signature on the Energy Independence Executive Order. But coal is dying as a major energy source in the United States for reasons far beyond the reach of executive orders.

“The miners are coming back,” Trump boasted at a rally in Kentucky last week, but no less an authority than Robert Murray, founder and CEO of Murray Energy, the biggest US coal company, promptly rained on his parade. “I suggested that (Trump) temper his expectations,” he said. “He can’t bring them back.”

Trump’s latest executive order is not just about coal, of course. It’s a frontal assault on all the Obama-era regulations that aimed at curbing climate change. But while it will slow the decline in US greenhouse gas emissions, it will not have a major impact on global emissions.

That is partly because US accounts for only 16 per cent of global emissions. Compared to China’s 29 per cent, it doesn’t matter all that much, and China remains committed to big cuts.

In January China scrapped plans for 104 new coal-fired power plants, and it intends to invest $361 billion (equal to half the US defence budget) in renewable energy between now and 2020.  The Chinese government is spending that kind of money because it is rightly terrified about what global warming will do to China’s economy and above all to its food supply.

Like the Indians, the Europeans, and pretty much everybody else, the Chinese remain committed to the climate goals agreed at Paris in December 2015 even though the United States has defected. Their own futures depend on meeting those goals – and they know that the American defection does not destroy all hope of success. Globally speaking, it’s not that big a deal.

It would seem like a much bigger deal, however, if they were not confident that American greenhouse gas emissions will continue to decline under Trump, though not as fast as they would under a less ignorant and less compromised administration. Coal provides an excellent example of why.

In 2009, when Barack Obama entered the White House, coal provided 52 per cent of US electricity. In only eight years it has fallen to 33 per cent, and the decline has little to do with Obama’s Clean Power Plan. First cheap gas from fracking undercut the coal price, and then even solar power got cheaper than coal – so 411 coal-fired plants closed down, and more than fifty coal-mining companies went bankrupt.

Coal is by far the most polluting of the fossil fuels, producing twice as much carbon dioxide as gas does for the same amount of energy, but that alone wasn’t enough to turn the energy industry against it.  It’s the cost per kilowatt-hour of electricity that matters, and coal has simply been overtaken by cheaper forms of energy.

Even in India, the most heavily coal-dependent of the big economies and a country with vast amounts of coal, solar energy prices are now on a par with coal. Sheer inertia means that India will go on expanding coal-fired generation for a few more years, but its National Electricity Plan projects no further increase in coal-based capacity after 2022. King Coal truly is dead.

You don’t need good intentions to do the right thing for climate safety any more; just common sense. From fuel efficiency in automobiles to replacing coal-fired plants with natural gas or solar arrays, saving money goes hand-in-hand with cutting emissions. The economy is not your enemy; it’s your ally. So Trump won’t do nearly as much harm as people feared.

That’s what would be at stake over the next four years if Trump’s presidency stopped all the anticipated reductions in greenhouse emissions that Obama based his promise on – but it won’t. A lot of those emission cuts are going to happen anyway, because they just make economic sense. At a guess, around half of them.

So how much damage can Trump do to the global fight against climate change over the next four years? He can keep global emissions about one per cent higher than they would have been if the United States had kept its promise to the Paris conference. And that’s all.