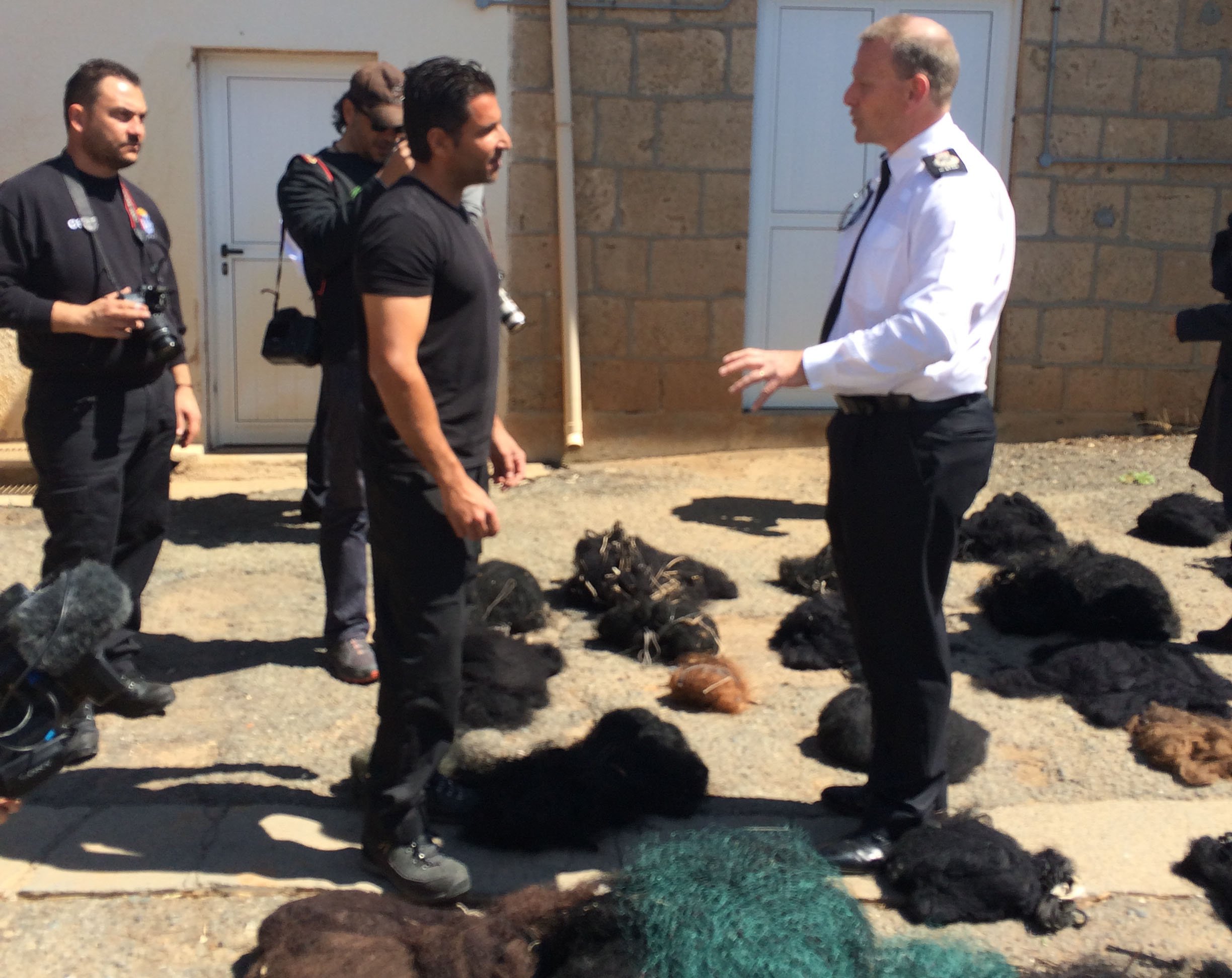 Chief Constable Chris Eyre, with confiscated nets on the ground, talking to members of his team

More than 3,000 trapped songbirds have been released and over 1,000 nets confiscated on British bases in Dhekelia over the past year in a crackdown on poaching, bases’ police said at a press conference on Monday.

The announcement comes days after an RSPB and Birdlife Cyprus study criticised British authorities in Cyprus for failing to effectively tackle the problem. It said 1.7 million birds were illegally killed across the Republic of Cyprus in 2016, more than 800,000 of them on the British military territory that extends for around 100 sq km.

Police said the fight against poachers is getting more difficult as the criminals have ever-improving sound technology to lure the birds into traps at their disposal.

“In the past there were cassettes, then CDs and now MP3 players,” said Sergeant Andy Adamou, one of the men who removes the illegal equipment daily.

“The devices they have now are very small and can be switched on and off via remote control. You can be in Paphos and switch on the sound in Paralimni at 3am or simply use a timer – it is almost impossible to find them,” he added.

This new technology eliminates the need for big batteries, cables and loudspeakers, all of which can be more easily found.

After the birds are lured by the sounds they are trapped in fishing nets that poachers order via the internet and customise. The songbirds are sold on the black market to be pickled, roasted or fried and eaten as a delicacy

Police on the bases also face hostile reactions from locals, who see amboupoulia, as the songbird dish is known, as part of Cypriot culture.

“I have been attacked, our cars were rammed and I was shot at,” Adamou said.

“We are walking a fine line,” Chief Constable Chris Eyre added. “We are trying to respect everybody. The local community would like us to do less and the environmentalists more. Both are trying to move the line in different directions.”

The team has arrested and prosecuted 78 people over the past year.

“One of them has been sentenced to six months in prison suspended for two years so if he is caught again during the two years he will go to prison,” said Eyre. “This sends an important message.”

Eyre said the most effective way of hurting the poachers is by cutting their profits, which police say are reaching “almost an industrial scale”. To this end severe fines have been introduced, and when equipment is seized radios are destroyed, batteries, speakers and wires recycled and nets – which can cost as much as €80 each – are made into pellets.

The police’s community action team is trying to inform the public about the laws and consequences surrounding poaching by distributing flyers before bird migration season in spring and autumn. They also regularly visit local schools.

The police are confident they are on the right track, and are planning to spend more time trying to save birds’ lives in the coming year. Like the poachers, they have access to better technology nowadays, though they would not comment on what this entails.

Our View: Abundantly clear that the momentum of the talks has been lost