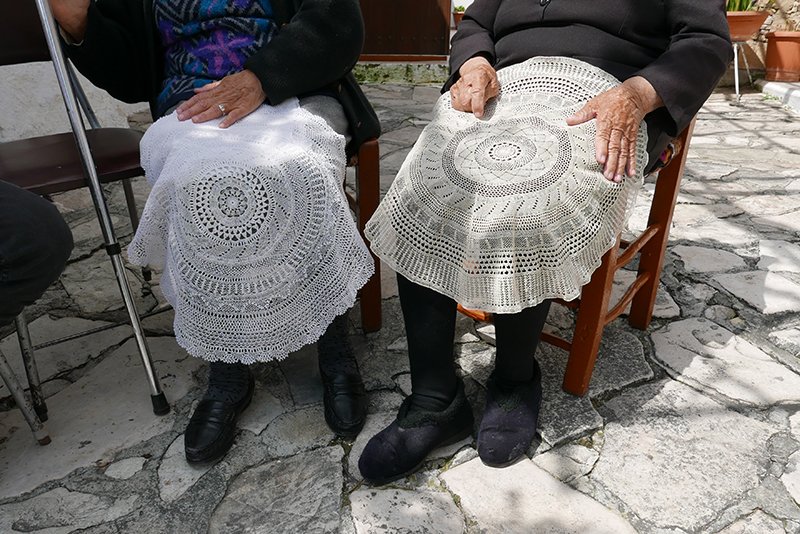 It’s the old and the new in a delightful amalgamation of the most ancient of crafts and the most modern of arts. Known as Craft Stories, it’s set to present the stories of yesteryear in the format of the ninth art, and aims to preserve, engage and revive much of what makes Cyprus unique: our traditional crafts…

A PhD project initiated by Christina Skarpari, who is studying Socially Engaged Communication Design at Central St Martins, Craft Stories attempts to present the wisdom, tales and experiences of those who practise endangered local crafts in the form of a comic book; a visual anthology of just what makes the island’s crafts exceptional.

“So many of our local crafts are dying out,” explains Christina. “There’s an official Unesco list of endangered local crafts, such as the traditional basket-weaving of Livadia village, and the lace-making in Koilani. These are crafts which are part of our heritage, they go back hundreds of years, but they’re becoming extinct as we lose touch with the art and the artisans involved. So, as a communication designer, I looked at methods of presenting the stories of the craftspeople in a way that would be accessible, that would raise awareness amongst the younger generations.”

Falling under the umbrella of Xarkis (an NGO with a focus on cultural and educational initiatives), and sponsored by Youthopia, the Bank of Cyprus, and the University of Nicosia, Craft Stories has been in motion since the start of the year. Gathering a group of like-minded creatives, Christina set about researching endangered traditional local crafts. “We’re in the process of collecting the stories of the craftspeople at the moment: recording and videoing their testimonies before reviewing, translating and editing the material in order to create a comic book.”

While many people, she adds, know of the local crafts, few realise they’re on the wane. “There are workshops on weaving, for instance, but they’re mostly attended by people in their sixties and above; the documentaries you see on television glorify the crafts but then neglect to mention that they’re dying out… What we hope to do is bring that information to a whole new audience in a way that inspires them to engage.

“Comic books,” she continues, “are a light, easy-to-read medium. We live in a very visual time, and younger people can identify with this modern medium: a comic strip is ideal for passing on an important social message about something very serious. There are aspects of our cultural heritage that are literally becoming extinct – and we need to fix that! These comic strips will be, I hope, insightful and inspiring. We’re not creating a manual for the crafts here, we’re presenting the stories in a way that might be humorous or dark, which may involve historical references, but is ultimately relatable and human. It all depends,” she adds, “on the narratives that are shared with us…”

While Christina herself has recently returned from her first set of interviews with the phythkiotiko weavers of Phyti, the other three team members are currently interviewing traditional basket weavers of Livadia, and pipilla lace-makers of Koilani. “We’re all creatives, and we’re all covering a different village and a different craft,” she explains. “We’re from varying backgrounds, which I believe gives us a more holistic view of the ethnic diversity in Cyprus, and we’re all fascinated by traditional crafts and craftspeople. My interviewee, for example, is one of the master weavers of Phyti. She’s in her seventies and has been practising the intricate craft for many years; she remembers when the village boasted a host of artisans.”

Today, Phyti has only four traditional weavers. “There’s so much scope there: these are people who live a simple, sustainable lifestyle and they’re utterly content in who they are and what they do. My interviewee makes her own bread and wine, grows her own food and has a wonderful sense of humour. She asked if I’d like to learn to weave, and lamented the lack of patience in the younger generations; she joked that I should come back soon as she enjoyed meddling in other people’s business! Her 83-year-old husband,” Christina adds, “helps to run the village museum. It’s falling into disrepair, and has no government funding whatsoever… it made me realise it’s important not just to document the crafts but also to preserve the history of what is being done.”

After the initial interviews are completed, the team will set about compiling and reviewing the video footage before working on the creation of a narrative for their comic book. “We’re getting a lot of help from various educators,” says Christina. “For example, researcher Nicoletta Demetriou has hosted two workshops for the team; film-maker Andreas Kyriacou has introduced us to film-making techniques, and academics Lucy Avraamidou and Nicoletta Christodoulou have given us a short webinar on sharing experiences through oral history projects, and the related law and ethics.”

While Christina envisages the final book being complete by May, thus far, no funding for a print version has materialised. “We have a deadline for the digital prototype by May 15: an anthology of comic strips – telling the stories through four strips, each by a different member of the team. The purpose is for them to be true to the oral history narrative but with the nuances found in the visuals. So I might tell the story of a decrepit museum and an endangered craft, and how they are brought back to life; Vasilis – who is working with basket-weavers – has already discovered that the artisans in Livadia feel they’re losing out to Ikea Tupperware, so he might produce a piece highlighting how globalisation affects the craft!

“Ultimately, we’re still looking for funding to produce a print edition,” Christina reveals. “At the moment we have enough funding for our digital version but, ideally, we’d like to print the book and use the funds for social entrepreneurship: helping the communities to sustain themselves. It is,” she adds, “a lengthy project, and a very experimental path into unknown territory. I feel that if we manage to impact people, inspire them to join us or to engage with the crafts and the craftspeople, then it will be a huge step forward. Craft Stories,” she concludes, “is far more than a PhD project: it’s a lifetime investment.”

Coe apologies after Iaaf says it has suffered cyber attack

No matter how many tests we perform, the virus will keep spreading