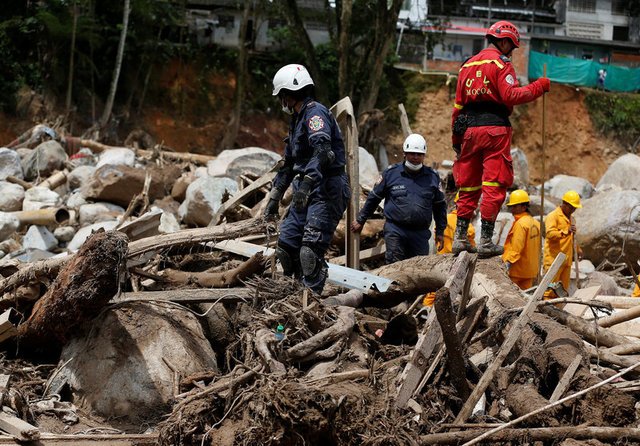 Rescuers look for bodies in a destroyed area in Mocoa

Families and rescuers searched desperately on Sunday through mud-plastered rubble for victims of flooding and landslides in Colombia that have killed 254 people, injured hundreds and devastated entire neighborhoods.

Several rivers burst their banks near the southwestern city of Mocoa in the early hours of Saturday, sending water, mud and debris crashing down streets and into houses as people slept.

Volunteers and firefighters tended to 82 bodies downstream in the town of Villagarzon and said many corpses were still caught in debris.

“We had to recover them ourselves. We think we’ll find more,” Villagarzon Mayor Jhon Ever Calderon told Reuters. He said the town had no coffins or sanitary storage.

Many families in Mocoa stayed up through the night to search through the debris, despite the lack of electricity in the city.

“I need to know where they are, if they are injured or where to find them,” sobbed Maria Lilia Tisoy, 37, looking through the rubble for her two daughters, one pregnant, and a 4-year-old granddaughter.

“If they are dead, please God deliver them to me,” she said.

President Juan Manuel Santos made a second visit to the area on Sunday. He said water and energy services would be restored as soon as possible.

Santos blamed climate change for the disaster, saying Mocoa had received one-third of its usual monthly rain in just one night, causing the rivers to burst their banks.

There was disagreement over the death toll for most of Sunday but, late in the evening, the government’s total was increased to match the 254-person figure released by the army. Just over 200 were injured.

The disaster came after deadly flooding in Peru killed more than 100 people and destroyed infrastructure.

Families of the dead will receive about $6,400 in aid and the government will cover hospital and funeral costs.

Even in a country where heavy rains, a mountainous landscape and informal construction combine to make landslides a common occurrence, the scale of the Mocoa disaster was daunting compared to recent tragedies, including a 2015 landslide that killed nearly 100 people.

The president also thanked China and the Inter-American Development Bank for donating $1 million and $200,000 respectively toward relief efforts.

Barca down Granada after Real labour to win over Alaves