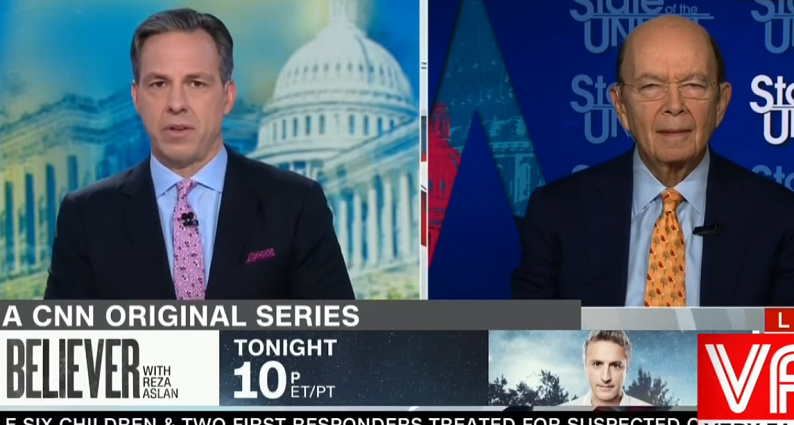 Former Bank of Cyprus (BoC) and current US Commerce Secretary Wilbur Ross said on Sunday that to the best of his knowledge, during his tenure at the bank from 2014 until this year, BoC did not provide any loans either directly or through another financial institution to the Trump campaign.

In an interview with CNN’s Jake Tapper, Ross who gave up his seat on the bank’s board in February when he was appointed by US President Donald Trump, was quizzed over alleged links between BoC and any individuals or entities placed under US financial sanctions.

“That’s a question that is very complicated to answer, because the bank had billions of dollars of loans that were made long before it got into trouble, long before I got involved with it,” said Ross. “So researching all of the names that it might have had as borrowers or depositor historically is not something productive. I can tell you no loan that I approved knowingly was to a person on sanction,” he added.

But Ross responded: “No. That’s not what I said. What I said is that all large loans were approved by the committee of the board that I was on. None of those loans went to anybody with sanctions that I’m aware of and nor were there any great big deposits from sanctioned parties that came in while I was involved, that I was aware of.”

A widely-reported AP article last week said that US authorities were probing Trump’s former campaign manager Paul Manafort for ties to Russia through alleged dealings with the bank between 2007 and 2012. They also reported that Cypriot authorities had handed over relevant information to their US counterparts. This has been denied by both the attorney-general and the justice minister who both said the US had not asked.

BoC said on Friday it did not have any standing relationship with Manafort or any related entities to him.

Last Monday the banks provided to the Cyprus Mail the answers it sent to questions from MSNBC, stating that the bank “maintains no relationship with Paul Manafort or any companies connected to him”.

It said the bulk of the accounts in question – relating to 15 accounts – were maintained with the now defunct Laiki or Cyprus Popular Bank (CPB).
Although most of CPB’s assets were bequeathed to BoC in April 2013 these did not include any accounts or activities relating to Manafort “either directly or indirectly”, the bank said.

Juve hold out for tense draw at Napoli, Milan held