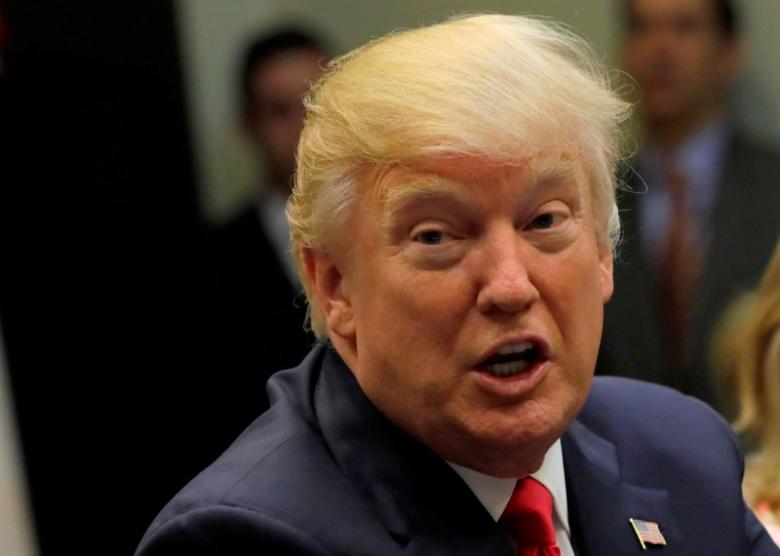 US President Donald Trump attends a meeting at the White House in Washington, US, March 31, 2017

US President Donald Trump held out the possibility on Sunday of using trade as a lever to secure Chinese cooperation against North Korea and suggested Washington might deal with Pyongyang’s nuclear and missile programmes on its own if need be.

The comments, in an interview published on Sunday by the Financial Times, appeared designed to pressure Chinese President Xi Jinping ahead of his visit to Trump’s Mar-a-Lago resort in Florida this week.

“China has great influence over North Korea. And China will either decide to help us with North Korea, or they won’t. And if they do that will be very good for China, and if they don’t it won’t be good for anyone,” Trump was quoted as saying, according to an edited transcript published by the newspaper.

Asked what incentive the United States had to offer China, Trump replied: “Trade is the incentive. It is all about trade.”

Asked if he would consider a “grand bargain” in which China pressured Pyongyang in return for a guarantee the United States would later remove troops from the Korean peninsula, the newspaper quoted Trump as saying: “Well if China is not going to solve North Korea, we will. That is all I am telling you.”

It is not clear whether Trump’s comments will move China, which has taken steps to increase economic pressure on Pyongyang but has long been unwilling to do anything that may destabilise the North and send millions of refugees across their border.

It is also unclear what the United States might do on its own to deflect North Korea from the expansion of its nuclear capabilities and from the development of missiles with ever-longer ranges and the capacity to deliver atomic warheads.

Trump’s national security aides have completed a review of US options to try to curb North Korea’s nuclear and missile programmes that includes economic and military measures but leans more toward sanctions and increased pressure on Beijing to rein in its reclusive neighbor, a US official said.

Although the option of pre-emptive military strikes on North Korea is not off the table, the review prioritises less-risky steps and “de-emphasises direct military action,” the official added, saying it was not immediately known if the National Security Council recommendations had made their way to Trump.

Trump and Xi are also expected to discuss Chinese ambitions in the South China Sea, through which about $5 trillion in ship-borne trade passes every year, when they meet on Thursday and Friday. China claims most of the resource-rich South China Sea, while Brunei, Malaysia, the Philippines, Taiwan and Vietnam also have claims on the strategic waterway.

Secretary of State Rex Tillerson spoke on Sunday with China’s top diplomat, State Councilor Yang Jiechi, about Xi’s visit “and other issues of bilateral and regional importance,” a State Department official said on condition of anonymity.

Trump’s deputy national security adviser, K.T. McFarland, said there was a “real possibility” North Korea could be capable of hitting the United States with a nuclear-armed missile by the end of Trump’s four-year term, the Financial Times reported.

McFarland’s estimate appeared more pessimistic than those of many experts.

“The typical estimates are that it will take five years or so,” said Siegfried Hecker, a former director of the Los Alamos National Laboratory in the United States and a leading expert on North Korea’s nuclear program.

Such estimates are notoriously hard to make both because of the scarcity of intelligence about North Korea and uncertainty about how high a success rate Pyongyang might want for such missiles.

John Schilling, a contributor to the “38 North” North Korea monitoring project, said Pyongyang might have missiles capable of limited strikes on the US mainland by the end of Trump’s term, but “it will most likely be a bit later than that.”

“I doubt that any missile they could put into service by the end of 2020 will be very reliable, but perhaps it doesn’t have to be – one or two successes out of six launches against the US would be a political game-changer to say the least,” he said.

The cost of an AK-47 on the black market