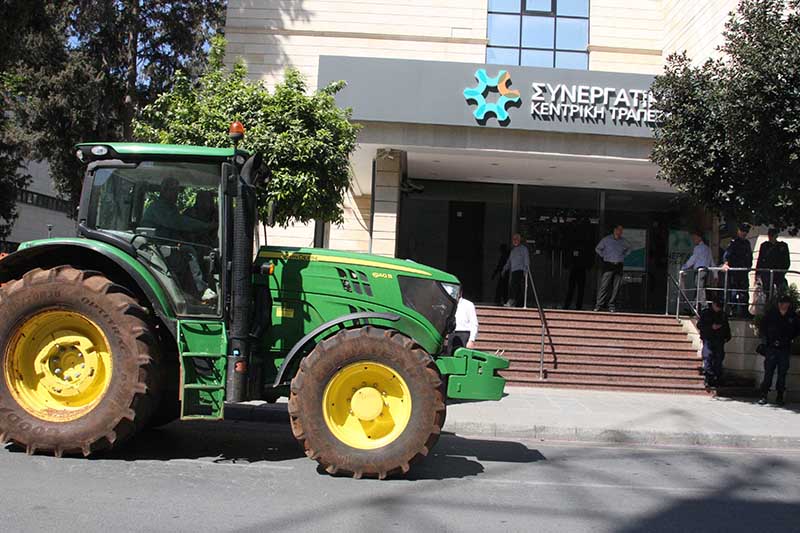 Farmers demonstrating outside the Co-op Central Bank on Tuesday

Cypriot farmers’ unions want to regain ownership of the bailed out Cooperative Central Bank (CCB) including subsidiaries they mismanaged in the past as the government prepares to hand out its shares ahead of a planned listing.

The Co-op, in which political parties traditionally enjoyed strong influence and into which the government injected almost €1.7bn in the past three years to help it remain solvent “was the creation of the farmers’ movement,” secretary general of farmers’ union PEK Michalis Lytras said in an interview on state radio CyBC on Tuesday, ahead of a protest gathering outside the CCB’s headquarters. “It serves not only farmers but also the entire population”.

The listing on the Cyprus Stock Exchange (CSE), which provides for a gradual dilution of the government’s 99 per cent stake to 25 per cent with subsequent capital increases over the next three years, risks bringing the CCB, “the only Cypriot bank in Cyprus”, into the hands of foreign owners, Lytras continued in an apparent reference to the current ownership status of Bank of Cyprus and Hellenic Bank which dramatically changed following the 2013 banking crisis.

Hungary passes law that could drive out Soros-founded university