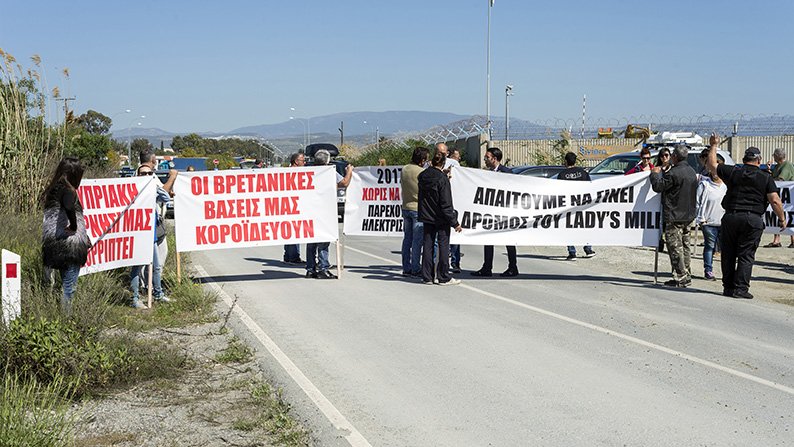 The protesters near Lady's Mile beach on Wednesday

Owners of businesses near Lady’s Mile beach prevented access to Limassol port for a short time on Wednesday to demand improved access to the popular beach and provide services to visitors.

Protesters had initially blocked the Limassol port’s entrance, angering lorry drivers, and then moved toward the road leading to Lady’s Mile, accompanied by MPs, party representatives and area community leaders.

On Tuesday, business owners had sent a letter to the British bases administration, under whose jurisdiction Lady’s Mile falls, requesting the creation of better infrastructure in the area.

In the letter, they mentioned that the beach area has no tarmac road, no sidewalks or bicycle lanes, no electricity, or telecommunications lines, nor public toilets or changing rooms. It also lacks a sewerage system. They also protested over the inadequate number of lifeguards. At the moment, business along the Lady’s Mile strip use electricity generators.

A representative of the restaurant owners, Fylios Demetriades, said that unless the projects they were promised are not promoted, they would take more drastic measures.

“We pay our taxes, as every Cypriot European citizen and yet we get nothing from the EU and the Cypriot government,” he said.

The community leader of Tserkezoi village, Andreas Stavrou, said that the area should be redeveloped as soon as possible to benefit tourism in the area.

Disy’s Limassol MP, Andreas Kyprianou, said that it was unacceptable that “the longest and probably the most beautiful beach in the Middle East was not turned into an organised beach”.

The House transport committee has discussed the issue three times, while a master plan on the area has been completed but that the approval of the British bases is pending as well as securing the necessary funds.

He added that the committee would put pressure on the transport ministry to prioritise the funding of the project. Should the bases give the green light, he said, the budget could be found within next year.

‘Around 270,000 Syrians have right to bring families to Germany’