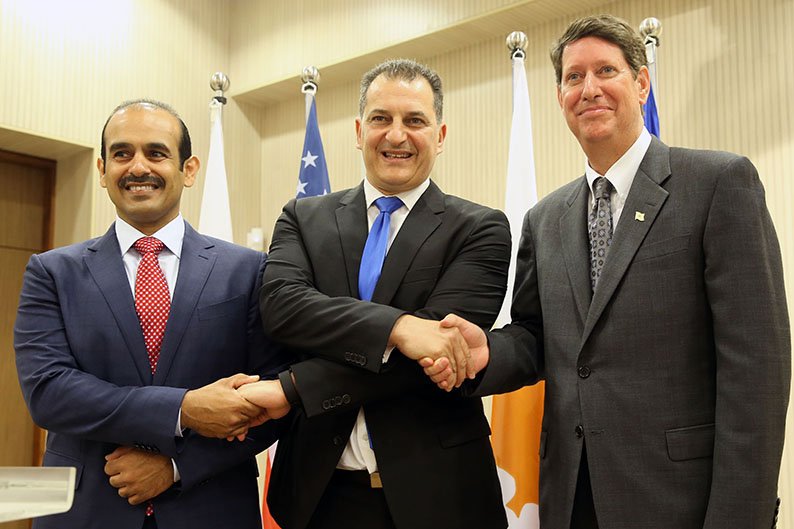 The contract for the exploration and production-sharing of block 10 in Cyprus’ exclusive economic zone (EEZ) was signed on Wednesday, in the presence of ministers of energy, foreign affairs, finance, and labour and delegations from ExxonMobil and Qatar Petroleum.

In a short speech after the signing, energy minister Yiorgos Lakkotrypis welcomed the commitment of the companies picked to develop block 10 to conduct exploratory drilling within 2018.

The government had decided to launch a third licensing round in February 2016, and managed to complete it within a year.

“By exercising our sovereign rights, we feel we have clearly achieved the target set by the government to attract oil and gas companies with extensive experience to operate in our EEZ,” Lakkotrypis said.

“The strategic significance of ExxonMobil’s and Qatar Petroleum’s presence in the EEZ of Cyprus and, for the first time, in the Eastern Mediterranean region, is immense, especially when considering their financial depth and calibre of expertise in the field of hydrocarbons and LNG.”

A total of 12 exploration wells will be drilled in the newly licensed blocks 6, 8, and 10, the minister said.

“In this regard, we welcome the commitment of the ExxonMobil and Qatar Petroleum consortium, expressed this morning to the president, for the drilling of their first exploration well within 2018,” he said.

Overall, Cyprus will receive a total €103.5 million in signature bonuses from the three contracts.

To commemorate Wednesday’s signing, Lakkotrypis presented each company a symbolic gift from the ministry’s Cyprus handicraft service: a copper copy of the ancient ship of Kyrenia.

“Copper was once the great source of wealth for Cyprus and the ancient ship of Kyrenia, the best-preserved shipwreck in the world, was salvaged from the depths of the Cypriot sea in the ’60s,” he told guests.

“Our sincere hope, therefore, at the start of our newly established cooperation, is that it leads to the fulfilment of our common goals and expectations, for the optimal exploitation of the underwater wealth in Cyprus’ EEZ.”

In a statement, the consortium said the two companies have a “successful history of developing gas resources”.

“We appreciate our strong working relationship with the ministry of energy, and look forward to working with the government of Cyprus to evaluate and realise the country’s hydrocarbon potential,” said Andrew Swiger, senior vice president of ExxonMobil Corporation.

Saad Sherida Al-Kaabi, president and CEO of Qatar Petroleum, said the agreement “expands our international upstream footprint into the Eastern Mediterranean for what we hope is one of the most promising opportunities in the area”.

“We look forward to working with the government of Cyprus along with our partner ExxonMobil in an effort to bring greater benefit to the country,” he said.

The contract includes a commitment from the ExxonMobil-Qatar Petroleum consortium to acquire 3-D seismic data, drill two exploration wells in the first licence period and work with the government to build skills and strengthen understanding of the petroleum business through focused training programmes, the consortium said.

The companies have begun planning for drilling operations and intend to drill a first exploration well in 2018.

Prior to the signing ceremony, the two companies’ delegations met with President Nicos Anastasiades.

Orwell’s ‘1984’ back in theaters in stand against ‘alternative facts’

The Mac’s waning relevance to Apple