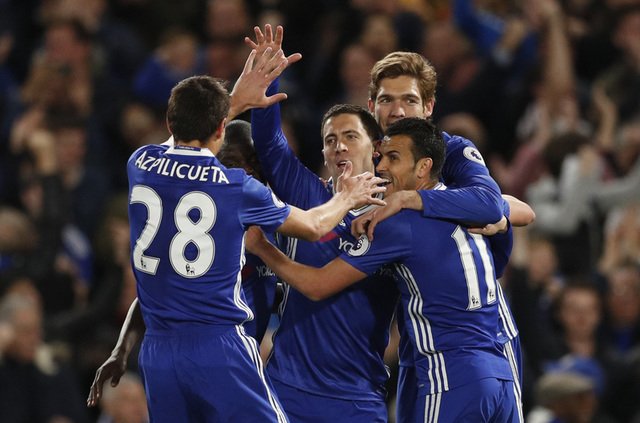 Chelsea recovered from their shock weekend blip with Eden Hazard’s double securing a nervy 2-1 victory over Manchester City that maintained a seven-point lead at the top of the Premier League.

Their defeat by Crystal Palace on Saturday re-ignited the title race but Chelsea responded with a gritty display.

Hazard’s deflected strike gave the hosts a 10th-minute lead although City keeper Willy Caballero should have saved his effort.

Sergio Aguero levelled with a tap-in after 26 minutes following a poor clearance by keeper Thibaut Courtois but Hazard restored Chelsea’s lead against the run of play in the 35th with a rebound after his weak penalty was saved by Caballero.

City skipper Vincent Kompany, starting a league match for the first time since November, grazed the top of Chelsea’s crossbar early in the second half.

Antonio Conte’s Londoners had to dig deep late on and had one enormous let-off in stoppage time when John Stones fired over the bar with the goal gaping.

Tottenham meanwhile produced a spectacular late comeback to beat Swansea City 3-1 with three goals in seven minutes as the clock counted down at the Liberty Stadium.

Spurs trailed to an early Wayne Routledge goal heading into the 88th minute but strikes in quick succession by Dele Alli, Son Heung-min and Christian Eriksen kept Spurs in the title hunt and dropped Swansea into the relegation zone.

Rumours of a fan protest were well founded with many empty seats visible during an otherwise uneventful first hour which yielded few chances before Mesut Ozil curled in a 58th-minute opener.

Theo Walcott doubled the Gunners’ advantage, finishing a slick passing move with a close-range finish 10 minutes later, before Olivier Giroud came off the bench and scored a sublime third to seal his side’s second win in seven games.

Liverpool’s hopes of a top-four finish were dented when Bournemouth’s Joshua King stabbed home an 86th-minute equaliser to rescue a 2-2 draw at Anfield.

The hosts, who stay third on 60 points, fell behind after seven minutes thanks to a howler from midfielder Georginio Wijnaldum, whose back pass played in Benik Afobe to round the keeper and slot home.

Only a terrific challenge from James Milner prevented Afobe doubling the visitors’ lead, but Liverpool regrouped and were level five minutes before half-time as Philippe Coutinho threaded home from 10 metres after being played in by Roberto Firmino.

Wijnaldum redeemed himself with a perfect cross for Divock Origi to head Liverpool ahead just before the hour, but the Merseysiders’ hopes of a fourth win in their last five matches were shredded by King’s late intervention.

Republic of Ireland striker Long spurned a trio of gilt-edged chances and Saints were almost made to pay for that wastefulness, until Yoshida came to the rescue.

Hull City kept alive their bid to avoid relegation after coming from behind to beat Middlesbrough 4-2 and pile more pressure on their beleaguered rivals.

The result lifted Hull out of the drop zone into 17th position on 30 points from 31 games, while Boro remained 19th with 23 points from 30 matches after stretching their winless league run to 13 games..