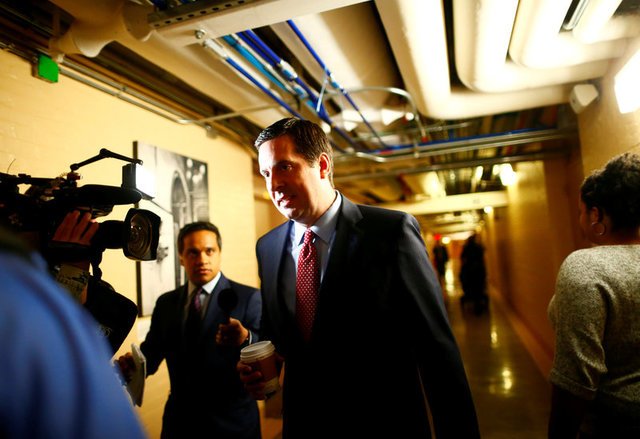 The Republican head of a congressional inquiry into alleged Russian meddling in the 2016 US presidential election said he would temporarily step aside from the probe on Thursday because he is under investigation for disclosing classified information.

Devin Nunes, chairman of the House of Representatives Permanent Select Committee on Intelligence and an ally of Republican President Donald Trump, characterised charges that he made unauthorised disclosures of classified information as “entirely false and politically motivated.”

The surprise disclosure that Nunes was under investigation injected new uncertainty into the wider Russia probe by his committee. The investigation is one of several in Congress examining whether Russia tried to influence the election in Trump’s favor, mostly by hacking Democratic operatives’ emails and releasing embarrassing information, or possibly by colluding with Trump associates.

The House Ethics Committee issued a statement saying it would investigate allegations Nunes may have made unauthorized disclosures of classified information “in violation of House Rules, law, regulations, or other standards of conduct.”

Nunes said in a statement that he had decided to step aside from the Russia investigation to fight the allegations and wanted “to expedite the dismissal of these false claims.” He will continue as committee chairman.

Representative Mike Conaway, the most senior Republican on the intelligence committee, will now lead the probe. While he was a strong supporter of Trump during the 2016 campaign, the seven-term congressman was not a member of Trump’s transition team, unlike Nunes.

The intelligence panel’s top Democrat, Representative Adam Schiff, said Nunes’ decision to step aside was made in “the best interests of the committee, and I respect that decision.”

Conaway, who is also chairman of the House Agriculture Committee and a former House Ethics chairman, is respected as an administrator and investigator.

“I have great admiration and respect for Mr. Conaway and look forward to continuing to work on that together,” Schiff told reporters.

Democrats criticised Nunes for his handling of the Russia investigation after he received information at the White House, held a news conference and briefed Trump on it – all before sharing it with other members of his committee.

“We need to move on. We need to have an independent, credible investigation that makes progress,” Representative Eric Swalwell, a committee member, told Reuters.

A White House spokesman declined to comment. “This is an internal matter for the House,” he said.

The ethics investigation stems from whether Nunes disclosed classified information while publicly discussing the contents of foreign intelligence reports.

“He’s just making sure that as he works through this other (ethics) process and makes sure that people understand he didn’t do anything wrong. He’s fully cooperating, and I believe he will be cleared,” she told reporters.

“But until that happens, it protects the integrity of the Russia investigation,” McMorris Rodgers said.

Nunes has insisted that no classified information was revealed, but Democrats and former intelligence lawyers said it was clear he had done so. Nunes said during his March 22 news conference that what he was discussing was “all classified.”

Trump sparked a controversy in March when he tweeted, without giving evidence, that Obama had wiretapped him as he competed with Democrat Hillary Clinton in the 2016 presidential race.

Two and a half weeks later, Nunes held a news conference saying an unidentified source had shown him intelligence reports containing “unmasked” names of Trump associates incidentally caught up in routine foreign surveillance.

Immediately afterward, critics said he had disclosed classified information in what many saw as an effort to provide cover to Trump’s wiretapping claim and distract from the wider Russia investigation.

Nunes said surveillance of Trump associates appeared legal but expressed concern that names of American citizens may have been improperly revealed and disseminated among government officials.

That allegation has kicked off an evolving, unsubstantiated controversy about whether the Obama White House tried to spy on the incoming Trump administration.

U.S. foreign intelligence activities are classified, but the president can authorize the release of information about them. It is not clear whether Trump authorized Nunes to discuss the foreign surveillance.

The ethics probe came just weeks after Nunes and other House Intelligence Republicans used a public hearing with FBI Director James Comey to decry leaks of classified intelligence that have fuelled concern about Trump’s ties to Russia and led to the ouster of former national security adviser Michael Flynn.