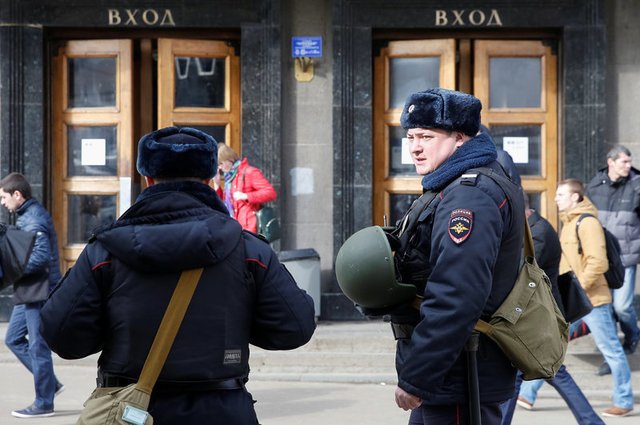 Police officers stay in front of a metro station following the St. Petersburg metro blast that took place on April 3, in Moscow

Russian authorities detained several people in St Petersburg on Thursday after finding an explosive device in one residential building and said they were investigating suspected accomplices of the man behind this week’s deadly metro bombing.

Bomb disposal experts made the explosive device found at the apartment building safe after evacuating people living in flats on two stairwells.

“We were told: the house is mined, get out quickly,” one woman, who only gave her name as Tatiana and lives in the building, told Reuters.

Another resident, who gave his name only as Anatoly, said he had seen police detain four young men occupying an eighth floor apartment next to his own.

St Petersburg is still reeling after a bomb ripped through the city’s metro on Monday, killing 14 people and injuring 50.

The attack, which authorities say was carried out by a Kyrgyz-born Russian citizen, has put renewed focus on the large number of emigres from mostly Muslim central Asian states, who have moved to Russia to work.

It said it had identified several people of central Asian origin who had been in touch with Akbarzhon Jalilov, the main suspect. A search of the suspects’ homes had turned up objects that were important for the investigation, it said.

It was unclear if those detained at the site of Thursday’s bomb scare were the suspected accomplices identified by the investigative committee.