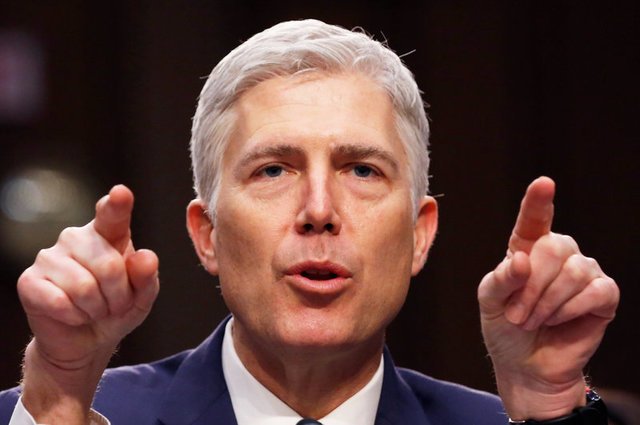 The Republican-led Senate on Friday gave Donald Trump the biggest triumph of his young presidency, confirming his supreme court nominee over stout Democratic opposition and restoring a conservative majority on the highest US judicial body.

Gorsuch‘s confirmation ends the longest supreme court vacancy since 1862 during the American Civil War, with the court down a justice for almost 14 months since long-serving conservative Justice Antonin Scalia died on Feb 13, 2016.

“He’s going to make an incredible addition to the court,” Senate Majority Leader Mitch McConnell said on the Senate floor.

McConnell said Gorsuch, who also worked in the Justice Department under Republican former President George W. Bush and is the son of the first woman to head the Environmental Protection Agency, has “sterling credentials, an excellent record and an ideal judicial temperament.”

Illustrating the importance of the moment, Vice President Mike Pence served as the Senate’s presiding officer during the vote.

Republicans, possessing a 52-48 Senate majority, on Thursday overcame a ferocious Democratic effort to block a confirmation vote by resorting to a rule change known as the “nuclear option.”

Senate Democratic leader Chuck Schumer, who led the opposition to Gorsuch, said he hopes the judge would heed concerns that the court is “increasingly drifting towards becoming a more pro-corporate court that favors employers, corporations and special interests over working America.”

The Senate’s approval of Gorsuch, 49, reinstates the nine-seat court’s 5-4 conservative majority, fulfilling an important campaign promise made by the Republican president.

Gorsuch was the youngest supreme court nominee since Republican President George H.W. Bush in 1991 picked Clarence Thomas, who was 43 at the time. Gorsuch could be expected to serve for decades, while Trump could make further appointments to the high court to make it even more solidly conservative because three of the eight justices are 78 or older.

Gorsuch‘s confirmation gave a boost to Trump, showing he can get important agenda items through a Congress controlled by his fellow Republicans after the House of Representatives last month failed to pass healthcare overhaul legislation. Trump is planning major tax cut legislation as well.

Senate Republicans resorted to extraordinary steps to overcome Democratic opposition to Gorsuch, including changing long-standing Senate rules to prohibit the use of a procedural blockade called a filibuster for supreme court nominees. The rule change was dubbed the “nuclear option” because it was considered an extreme break from Senate tradition.

Had the Senate confirmed Obama’s nominee Merrick Garland, the court would have tilted to the left for the first time in decades.

Trump has recorded accomplishments since taking office on Jan 20, including a variety of unilateral executive actions such as moving to undo Obama’s climate change regulations.

But Trump has run into trouble with some other major initiatives. Courts blocked his executive action to stop people from several Muslim-majority countries from entering the United States. His administration also has faced questions about any role the president’s associates may have played in alleged Russian meddling in the 2016 U.S. presidential election to help Trump.

The rule change could make it easier for Trump to win confirmation of supreme court nominees as long as Republicans control the Senate, with Democrats left powerless to resist even if he gets a chance to replace the court’s senior liberal, 84-year-old Ginsburg, or the court’s swing vote, 80-year-old Kennedy, with more conservative replacements.

Democrats accused Gorsuch of being so conservative as to be outside the judicial mainstream, favoring corporate interests over ordinary Americans in legal opinions, and displaying insufficient independence from Trump.

A conservative-majority court is more likely to support gun rights, abortion regulations, an expansive view of religious liberty and Republican-backed voting restrictions, while opposing curbs on political spending. The court also is likely to tackle transgender rights and union funding in coming years.

Gorsuch will be sworn in on Monday in two different ceremonies, one at the court and one at the White House. He can then prepare for the court’s next session of oral arguments, starting on April 17. The court’s current term ends in June. Gorsuch is expected to hear arguments in 13 cases.

Gorsuch‘s first official act would be to participate in the justices’ private April 13 conference to consider new cases to hear. There are appeals pending on expanding gun rights to include carrying concealed firearms in public, state voting restrictions that critics say are aimed at reducing minority turnout, and allowing business owners to object on religious grounds to provide certain services to gay couples.

On April 19, the court will hear a religious rights case in which a church contends Missouri violated the US Constitution’s guarantee of religious freedom by denying it funds for a playground project due to a state ban on aid to religious organisations. Gorsuch has ruled several times in favor of expansive religious rights during his decade as a judge.

Running a red light on the rise