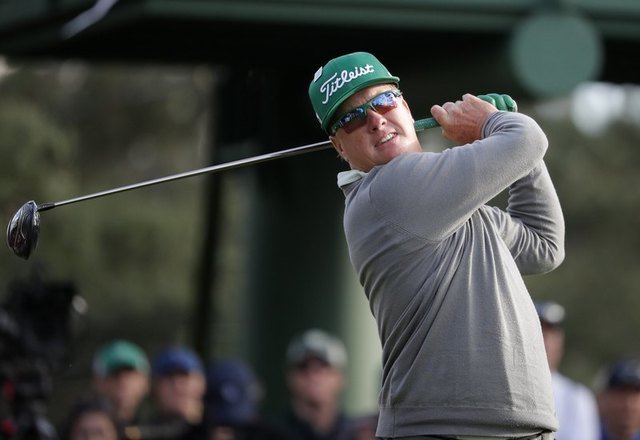 American journeyman Charley Hoffman led the U.S. Masters after firing a sparkling 65 in a wind-swept first round on Thursday as world number one Dustin Johnson pulled out due to a back injury.

The 40-year-old Hoffman made nine birdies, including four in a row from the 14th hole, to tame the fiendish Augusta National course and finish on seven under par, four shots clear of compatriot William McGirt and five ahead of England’s Lee Westwood.

Three-time Masters champion Phil Mickelson was among a large group of players on one under par along with English trio Justin Rose, Matthew Fitzpatrick and Andy Sullivan, and Spain’s Sergio Garcia.

American Johnson, favourite to win the title after victories in his last three tournaments, hurt his back in a freak accident on Wednesday but he looked comfortable on the driving range and arrived at the first tee in the final group out.

As compatriots Bubba Watson and Jimmy Walker prepared to tee off, however, Johnson suddenly walked back to the Augusta National clubhouse before informing organisers he was unfit to play.

“I just don’t feel like there is any chance of me competing,” Johnson said. “It hurts.”

Hoffman, who has won four PGA Tour titles, played a flawless back nine to forge ahead of world number 53 McGirt, who has only one Tour victory to his name.

“Obviously, it was a tough day with the wind,” world number 52 Hoffman told reporters.

“It was like a dream. You hit the shots that you’re looking at and then the hardest part is to convert the putts and I was able to do that and I got some good numbers coming down the stretch.”

Former world number one Westwood, joint runner-up last year, made five successive birdies late in his round to soar into contention to win a long-awaited first major.

Most players found scoring difficult in the swirling winds and England’s Danny Willett made an ugly start to his title defence with a double-bogey six at the first hole, but he fought back strongly to finish on one over.

American Jordan Spieth, the 2015 Masters champion, safely negotiated the 12th hole where he made a quadruple-bogey in last year’s final round to scupper his chances of defending the title.

But his Augusta demons returned with a quadruple-bogey nine at the 15th and he finished at three over.

World number two Rory McIlroy made a wayward start and slipped to three over but the Northern Irishman also found form over the closing holes to end at level par.

Earlier, former Masters champions Jack Nicklaus and Gary Player struck the ceremonial opening tee shots to get the 81st edition of the year’s first major off to a sombre start as they honoured Arnold Palmer, who died in September at the age of 87.

Thousands of golf fans stood to attention during a poignant silence broken only by the sound of a chilled wind rustling through the trees.

“It is a wonderful, but in one respect a difficult day,” Payne said.

“The almost unbearable sadness that we all feel by the passing of Arnold Palmer is only surpassed by the love and affection for him.”

The bright weather was a relief for organisers, who were forced to call off the Masters Par 3 contest on Wednesday for the first time ever as heavy rain and storms buffeted the course.