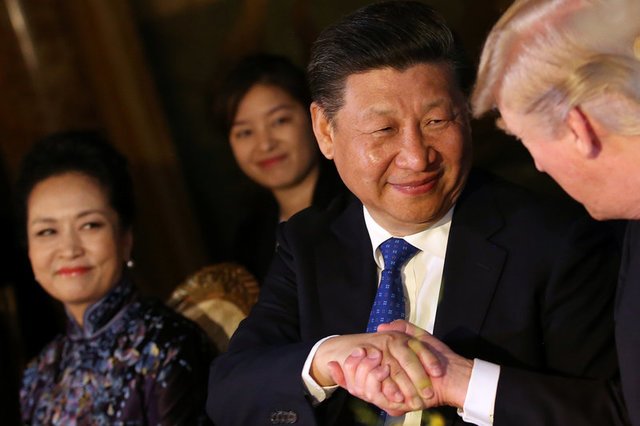 US President Donald Trump and Chinese President Xi Jinping sat down together to dine on pan-seared Dover sole and New York strip steak on Thursday, spending some social time before digging into thorny bilateral security and trade issues.

Trump has said he wants to raise concerns about China’s trade practices and urge Xi to do more to rein in North Korea’s nuclear ambitions during his first talks with the Chinese leaders, though no major deals on either issue were expected.

The summit at Trump’s Spanish-style Mar-a-Lago resort in Palm Beach, Florida, got off to a cordial start. Xi and his wife, Peng Liyuan, joined Trump and his wife, Melania, at a long table in a candle-lit ornate private dining room festooned with red and yellow floral centrepieces.

Trump, a New York real estate magnate before he ran for office, joked before dinner: “We’ve had a long discussion already, and so far I have gotten nothing, absolutely nothing, but we have developed a friendship – I can see that – and I think long term we are going to have a very, very great relationship and I look very much forward to it.”

The fanfare over the summit on Thursday was overshadowed by another pressing foreign policy issue: the US response to a deadly poison gas attack in Syria. A US official said on Thursday the White House and Pentagon were discussing military options.

Trump and Xi were expected to get into more detailed discussions about trade and foreign policy issues on Friday, concluding their summit with a working lunch.

Trump promised during the 2016 presidential campaign to stop what he called the theft of American jobs by China and rebuild the country’s manufacturing base. Many blue-collar workers helped propel him to his unexpected election victory in November and Trump wants to deliver for them.

“We have been treated unfairly and have made terrible trade deals with China for many, many years. That’s one of the things we are going to be talking about,” Trump told reporters ahead of the meeting.

Trump is still finding his footing in the White House and has yet to spell out a strategy for what his advisers called a trade relationship based on “the principle of reciprocity.”

“Even as we share a desire to work together, the United States does recognise the challenges China can present to American interests,” said Secretary of State Rex Tillerson, also in Florida for the meeting.

Trump’s daughter Ivanka and her husband Jared Kushner, who both work at the White House, also were among the dinner guests.

Their summit brings together two leaders who could not seem more different: the often stormy Trump, prone to angry tweets, and Xi, outwardly calm, measured and tightly scripted, with no known social media presence.

What worries the protocol-conscious Chinese more than policy clashes is the risk that the unpredictable Trump could publicly embarrass Xi, after several foreign leaders experienced awkward moments with the new US president.

“Ensuring President Xi does not lose face is a top priority for China,” a Chinese official said.

The most urgent problem facing Trump and Xi is how to persuade nuclear-armed North Korea to halt unpredictable behaviour like missile test launches that have heightened tensions in South Korea and Japan.

North Korea is working to develop an intercontinental ballistic missile capable of hitting the United States.

Trump has threatened to use trade to try to force China to exert influence over Pyongyang.

“I think China will be stepping up,” Trump told reporters on Thursday. Beijing says its influence is limited and that it is doing all it can.

The White House is reviewing options to pressure Pyongyang economically and militarily, including “secondary sanctions” against Chinese banks and firms that do the most business with Pyongyang.

A long-standing option of pre-emptive strikes remains on the table, but despite the tougher recent US talk, the internal review “de-emphasises direct military action,” the US official said, speaking on condition of anonymity.

Analysts believe any military action would likely provoke severe North Korean retaliation and massive casualties in South Korea and Japan and among US troops stationed there.

NO GRAND BARGAIN ON TRADE

On trade, US labour leaders say Trump needs to take a direct, unambiguous tone in his talks with Xi.

“President Trump needs to come away from the meeting with concrete deliverables that will restore production and employment here in the US in those sectors that have been ravaged by China’s predatory and protectionist practices,” said Holly Hart, legislative director for the United Steelworkers union.

A US administration official told Reuters that Washington expects to have to use legal tools to fight for US companies, such as pursuing World Trade Organisation lawsuits.

“I don’t expect a grand bargain on trade. I think what you are going to see is that the president makes very clear to Xi and publicly what we expect on trade,” a US official told Reuters, speaking on condition of anonymity.

Trump has often complained Beijing undervalues its currency to boost trade, but his administration looks unlikely to formally label China as a currency manipulator in the near term – a designation that could come with penalties.

Return-to-Varosha group gets organised, fed up with status quo

The world reacts to the US air strikes