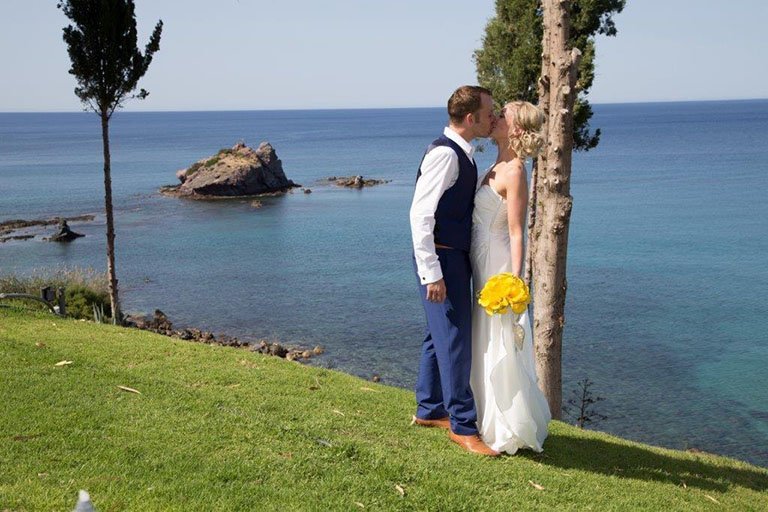 WITH the busy wedding season fast approaching, towns in the Paphos region are looking to further increase this lucrative form of income in an area that is fast becoming the number one choice for destination weddings on the island.

Particular attention is being paid to Polis Chrysochous which is dragging behind other Paphos municipalities in the numbers of civil weddings it conducts, despite being home to some of the island’s most stunning countryside and coastal views.

According to the recently elected mayor of Polis, Giotis Papachristofi, the municipality only hosted 40 civil weddings last year, the majority of which were for British couples. In contrast, out of the 8,000 civil weddings taking place in Cyprus last year, Geroskipou held 870, Peyia conducted over 500 and Paphos a whopping 2,500.

Papachristofi said that the Polis municipality is currently working with local tourist officials to promote wedding tourism in the area, but “more needs to be done”.

Nasos Hadjigeorgiou, the head of the Paphos regional board of tourism, said that Polis, in particular, is an untapped market, and that it will provide an upgraded wedding service in the near future. Aphrodite and Adonis are being used in promotion efforts, which legend tells have strong connections to the area. Adonis hunted in the Akamas forest while Aphrodite swam in the sea and bathed in a natural spring that bears her name.

“This is something that we are working on with the municipality to help them to select venues, such as on the beach, boats and chapels and examining ways which they can promote this, and increase numbers choosing this stunning area,” said Hadjigeorgiou.

Papachristofi said that wedding tourism was a very important source of income for the municipality and that the new council was determined to increase the number of civil marriages taking place.

“Our municipality has areas with such special beauty, where one could celebrate a wedding, such as St Andronicus Park (opposite the town hall), the Baths of Aphrodite, and the port of Latchi.”

Geroskipou municipality with 870 civil weddings last year is an old hand in the business, according to wedding officer Marina Polyviou.

“Most of these couples were British. Most book through travel agents and wedding planners, although some of them do so direct,” she said.

Weddings in Geroskipou can be held at the municipality as well at all of the hotels within their boundaries, she said. A popular choice is Aphrodite Hills, she added.

“Most of our couples from Israel get married at the town hall, and many come to get married, stay only one day to three days and go back.”

She ensures that all necessary paperwork is completed before any couples arrive on the island, and said that it is a simple, easy and quick procedure for those wishing to tie the knot.

Increasing numbers of Cypriot couples are also choosing civil weddings every year, as they prefer celebrations with “fewer people and not thousands of guests”.

Peyia municipality holds around 500 to 550 weddings per year, and expects a substantial increase this year, according to councillor Linda Leblanc. During high season, 10 to 12 weddings can be held in Peyia a day. Two wedding clerks undertake all of the necessary administration and also officiate at the ceremonies.

“The income for the municipality is about 250 thousand euros a year and we work mostly with specialist tour companies, so we don’t advertise, aside from attending the main wedding exhibitions, such as in Israel and London,” she said.

The councillor said that at a recent London fair, great interest was shown in Peyia ‘beachside’ weddings. “We are the only municipality that has its own seaside locations (not belonging to hotels or private villas).”

These are in areas such as the Sea Caves, and Agios Giorgios harbour.

Depending on location and time, the ceremony costs between 282 euros and 600 euros.

“We are also are starting something new this year – weddings on a Saturday, with a cost of 650 euros,” she said.

According to Hadjigeorgiou, British couples choosing the district of Paphos still make up the largest numbers but all four municipalities in the area were increasing their efforts to boost numbers both from Britain and elsewhere.

“Our slogan is ‘Live your dream at the birthplace of the goddess of love’, Paphos is a stress free wedding destination,” he said.

“The UK is a top priority, it’s our main market, but there is also great potential in Israel, Scotland, Russia and Lebanon,” he said.

The tourism head explained how the around 2,500 civil marriages held in Paphos last year were either wedding packages or individual purchases which usually include flowers, cakes, transfers, a reception, as well as accommodation, day trips and so on.

“Most couples are accompanied by a group of friends and family, some people have a handful, two or four guests, but most come with a group of between 20 to 25 people. So, this means around 50,000 to 60,000 people participating in weddings and receptions, according to the statistics for 2016.”

The tourism board and municipalities are participating in overseas wedding exhibitions, organising familiarisation trips for wedding planners and distributing electronic and print material and DVDs about the district.

“We are also encouraging airlines to increase flights from countries where we believe will benefit the wedding market.”

Recent increased flight connections with Israel are an example, he said.

“Getting married in Paphos is a very important experience, it’s a beautiful area and the legalities are not very complicated. In most other countries, weddings are much more expensive, the costs here are reasonable and competitive packages are offered,” said Hadjigeorgiou.

Politics pierces the nostalgia at Rock Hall of Fame induction