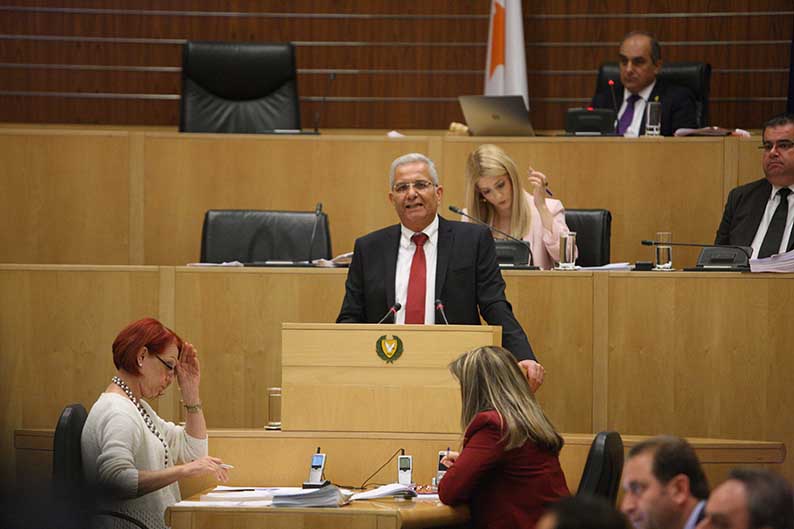 Andros Kyprianou addressing parliament on Friday. He says he was the victim of hate speech both openly stated and implied

Police announced on Saturday that they have started an investigation into the goings-on outside parliament following Friday’s voting on a contentious proposal effectively reversing an earlier decision to commemorate the 1950 Enosis (union with Greece) referendum in state schools.

Akel leader Andros Kyprianou said he plans to ask the attorney-general and the House speaker to look into incidents of hate speech during Friday’s tumultuous plenary session.

Exiting parliament after the session, Kyprianou fell victim to severe verbal abuse by an angry mob of far-right Elam supporters, who called him a “traitor”, a “Turk-lover”, and a “sell-out”.

On Saturday, police spokesman Andreas Angelides confirmed to the Cyprus News Agency that chief Zacharias Chrysostomou has ordered an investigation into the events that unfolded outside parliament after the plenary session.

During Friday’s plenum, Kyprianou had made a point of noting that parliament last year criminalised hate speech, arguing that Elam calling those who backed the proposal “national traitors” and members of other opposition parties suggesting similar views even if not saying them outright, constituted hate speech.

According to daily Politis, he plans to follow up on his argument by sending a letter to attorney-general Costas Clerides and House speaker Demetris Syllouris, asking them to look into whether such remarks constitute a violation of the law on hate speech and rules on parliamentary conduct, respectively.

The letter will refer not only to Elam officials, who accused the proposal’s backers of treason directly, but also those who implied it but did not explicitly make the accusation – most notably Diko leader Nicolas Papadopoulos. Kyprianou believes that Papadopoulos has crossed the line with his oft-repeated argument that Disy and Akel passed the proposal “at the urging of Turkey”, as well as his calling the proposal “Akinci’s law”.

“All of these unacceptable events did not come out of nowhere,” party spokesman Stefanos Stefanou said on Saturday.

“There are instigators, and they are political parties, politicians, media, whose weeks of hate speech caused tension and division.”

For weeks, they all referred to “red and blue treason”, Stefanou said, referring to Akel’s communist red and Disy’s nationalist blue, to “conceding and yielding”, to “complying with Turkey’s demands”, to “Ephialtes” (nightmares), and to “a humiliation of parliament”.

“In a letter, Akel will report the series of events to both the attorney-general and the House speaker.”

Ruling Disy, which had sponsored the proposal, was equally critical.

“The so-called centre bloc, and especially its leadership, must abandon the dangerous political games,” the party’s spokesman Prodromos Prodromou said.

“No one can present themselves as the ‘patriotism police’. Diko’s leader must realise that, much as he wants to be a candidate [in next year’s presidential election], he can’t don the guise of national Holy Inquisition.”

They name laws passed by the House of Representatives with Turkish names and submit to the people that they have been humiliated, Prodromou said.

“These things are dangerous,” he added.

“They feed a marginalised part of politics that wants to transform national sensitivity to a howl of hatred.”

Commenting on Friday’s exchanges in parliament, President Nicos Anastasiades said he could “only express sadness”.

“It is inconceivable that in a European country in 2017 political parties or the public can be divided into traitors or patriots,” he said.

“Let us finally take the lesson, since we truly want to honour the Enosis (union) referendum, of the outcome any time division has overwhelmed the minds of politicians.”

Meanwhile, socialist party Edek, which also opposed the proposal, called on Anastasiades to state whether he plans to sign it into law. They also asked Education Minister Costas Kadis, to whom the bill now bestows the power to now set school commemorations, whether he plans to remove the Enosis referendum from the list.

“We ask the president to clearly state whether he will accept and sign Friday’s parliament decision,” the party said in a statement.

“We also call on the education minister to state his intention. Will he remove or keep the brief reference to the 1950 Enosis referendum?”

Neither Anastasiades nor Kadis commented on the outcome of the vote on Saturday.

Edek reiterated its view that the transfer of decision-making authority on school commemorations from parliament to the minister is unconstitutional.

Citizens’ Alliance leader Giorgos Lillikas, who has otherwise aligned himself with the rejectionist bloc on the overall strategy in the Cyprus problem talks, appeared conciliatory and urged for restraint and unity.

“It is acceptable to have disagreements and strong opinions,” he said in a statement.

“But fostering a divisive atmosphere when our country is still occupied and Turkey continues to threaten us is a disservice to our country.”

Lillikas called on the public to “stay away from fanaticism and extremism”.