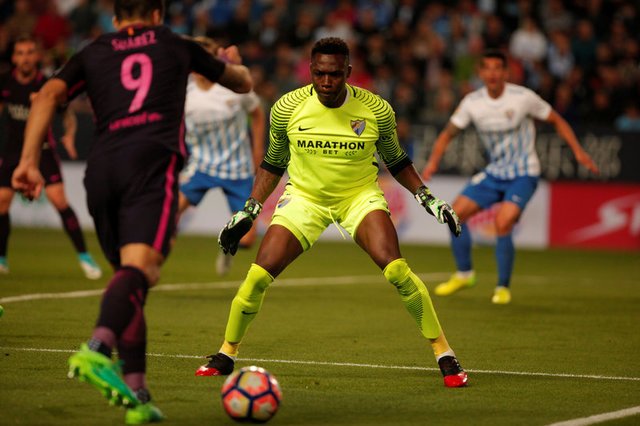 Neymar was sent off as Barcelona suffered a shock 2-0 defeat at Malaga on Saturday that scuppered their hopes of going top of La Liga and handed control of the title race to leaders to Real Madrid.

Zinedine Zidane’s Real were held to a 1-1 draw with Atletico Madrid in the capital derby earlier in the day, giving Barcelona the chance to go top on goal difference, but Luis Enrique’s side squandered the opportunity and now sit three points behind Los Blancos, who have played a game less.

Former Barcelona striker Sandro Ramirez opened the scoring for Malaga with a breakaway goal in the 32nd minute before Jony added a 90th-minute second for the hosts.

Neymar was shown his second yellow card and dismissed midway through the second half.

Luis Enrique was angry with several of referee Gil Manzano’s decisions, including the award of a free kick rather than a penalty after Charles fouled Sergi Roberto in the box.

“It’s curious that a team like us that doesn’t usually kick people gets so many yellow cards in such an incomprehensible manner,” he said.

“There was some very ugly tackles from behind from their team which didn’t see them get booked and others committed by us which were given yellows.

“The rules are there to be interpreted, but equally for everyone. I don’t understand how the foul on Sergi Roberto was given outside the area, but we are used to it.”

After the Madrid derby ended in a draw a victory at La Rosaleda would have sent Barcelona level with Madrid on 72 points.

Neymar was booked in the first half for tying his laces in front of a Malaga player trying to take a free kick and received his marching orders for a late tackle on Diego Llorente in the 65th minute.

Adalberto Penaranda put the ball in the net for Malaga but his effort was incorrectly ruled out for offside.

Malaga grabbed a second at the death, however, with the excellent Pablo Fornals unselfishly teeing up Jony.

Earlier on Saturday, Madrid handed their arch-rivals the chance to depose them at the top of the table, as Antoine Griezmann grabbed an 85th-minute equaliser for Atletico.

Pepe opened the scoring for Real with a looping header in the 52nd minute and it looked like the hosts would earn victory, until the Frenchman intervened late on, reaching Angel Correa’s through ball and slotting home.

Madrid coach Zidane put the dropped points down to a lapse in concentration.

“It was a great performance (from Real), but we just lost concentration for five minutes,” he said.

“I can’t say that Atletico played well. We didn’t get the second goal and we suffered.”